The trade deadline is just 10 days.  The Yankees are starting to carve out their position in the market and for once it's not a strictly buyer position.  The immediate and short-term futures of this organization can be changed in the next week plus and there are a lot of things that could play out, some outcomes more realistic than others.  If you missed any of the prep posts from this past week at AB4AR, here they are again:

Friday- The Predictions
Posted by Unknown at 4:39 PM No comments:

As first reported by almost the entire beat writer contingent and just confirmed by the RailRiders themselves, Alex Rodriguez will not be in the lineup today on what was supposed to be the final day of his rehab assignment before being activated off the Major League DL tomorrow.  This comes after A-Rod was forced to DH yesterday instead of playing third base due to tightness in his left quad.  Rodriguez went 0-4 with 3 strikeouts in that game and now it appears that this quad could be more problematic than first thought.

It's too early to tell right now, but all signs are pointing towards A-Rod not being activated for tomorrow's game in Texas.  The Yankees are already going through a tricky quad injury with Derek Jeter and they were quick to put him on the DL on Friday morning when they had the opportunity.  They'd look pretty foolish trying the same thing with A-Rod and having him wind up back on the DL too.  I'm sure we'll get more from the team about this as the day goes on.  I don't expect it will be good news.

** UPDATE 6:55 PM- Directly from the team itself, A-Rod has been officially diagnosed with a Grade I quad strain and will not be traveling to Texas to join the team tomorrow.  He will instead go back to Tampa for rest and treatment, and with his 20-day rehab window expired the Yanks may have to get creative to get him back ready to play. **
Posted by Unknown at 10:41 AM No comments: 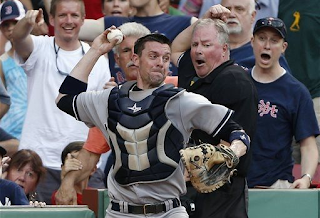 (Yankee defensive play of the game.  Maybe of the year.  Courtesy of the AP)

It was an ugly start to the Yankees' second half on Friday night.  Their starting pitching wasn't great, their offense wasn't good at all, and they dropped another game in the postseason race.  Things got worse earlier yesterday when they lost another player - Zoilo Almonte - to the DL and made some moves to call up more scraps to add to the heap.  They needed something good yesterday to get a little positive momentum going, a win perhaps, and they had the right guy on the mound to help get it done in Hiroki Kuroda.  He showed up in a big way today and in a much appreciated change of pace he got some offensive support on his way to his 9th win of the season (still not enough for Jim Leyland).

- The offense had a few chances early.  Brett Gardner led off the game with an infield single and got doubled off on an Ichiro lineout, and they couldn't come through with runners on second and third in the 2nd.

- Hirok was up to the challenge of covering them though.  He worked around a HBP in the first thanks to some bad baserunning by Daniel Nava and had his fastball and slider working really well early.

- The Yanks blew another opportunity in the 5th when Eduardo Nunez was thrown out trying to score on a grounder to third.  John Lackey helped redeem them by throwing a wild pitch to move Luis Cruz to second and Gardner capitalized with an RBI single to give New York a 1-0 lead.

- The smallball success continued in the top of the 7th against a tiring Lackey.  Nunez doubled, moved to second on a Chris Stewart groundout, and scored on a single by Cruz.  Another single by Gardner put 2 on with 1 out and 1 in to end Lackey's day.

- Kuroda helped his cause covering the plate on a passed ball in the 5th to keep the game scoreless, then hurt it with a wild pitch in the 7th that allowed a second run to score.  Still, 2 runs in 7 against the Sawx and handing it over to D-Rob and Mo is a job well done.

- D-Rob and Mo handled things easily in the final 2 frames, thanks in part to a spectacular catch-throw double play by Chris Stewart to end the 8th, and the Yanks evened up the series.