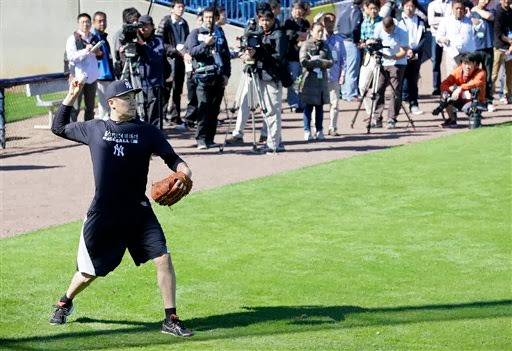 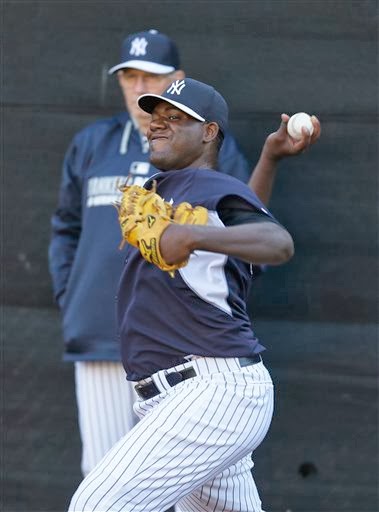 There you have it.  A mix of mostly lower-level guys and fringe roster competitors.  Let's play ball!

It was a light workout day yesterday before the Yankees' first ST game of 2014.  They had their players' union meeting and did their annual team bonding outing (pool tournament), and there was a little pitching.

- The highlight of that pitching was Masahiro Tanaka throwing batting practice and continuing to get rave reviews on his splitter.  Did you know it's what was in Marcellus Wallace's briefcase in "Pulp Fiction"?

- As for today's lineup, we still don't know what it's going to be but Joe did say that Brett Gardner, Francisco Cervelli, and Kelly Johnson would be the only regulars to play.  And we already knew that Vidal Nuno was getting the start.

- Andrew Bailey showed up to camp and did some stretching and long toss.  He told the media he was "100%" expecting to pitch this season.

- He didn't do much, but Alfonso Soriano was back on the field and in action this morning.  Looks like he's over his flu.
Posted by Unknown at 7:45 AM No comments:

Who cares that there's only going to be a handful of regulars in today's lineup and none of the really big names?  This afternoon the Yankees will take the field for their first game of the 2014 Spring Training season and that means baseball is one step closer to really being back!  I want Gardner to go 2-2 with 2 stolen bases, I want Kelly Johnson to play a clean game at third and smack a home run, and I want Vidal Nuno to toss 3 shutout innings.  Let's go Yankees!
Posted by Unknown at 6:25 AM No comments: