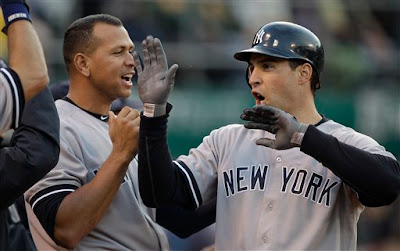 ("Seriously, guys.  I thought I was going to make it to third."  Courtesy of The AP)﻿

The Yankees had their travel day on Thursday, I had mine yesterday.  I still made it home in time to watch the majority of their series opener in Oakland last night, and it was a great feeling.  Ivan Nova was on the hill, trying to move away from the issues he's had locating the ball in the strike zone and giving up a ton of extra base hits, and the offense was trying to keep their positive trend going and hit more of them.

- Nova said after his last start that he wanted to get back to generating more groundball outs and he was doing that early last night.  Through 4 innings, he hadn't allowed a run and had 4 GB outs and 2 Ks.  He was keeping the ball down and working efficiently against the light-hitting A's lineup.

- The Yankee offense didn't appear to have missed a beat after the travel day.  They were on Tyson Ross from the top of the 1st when they put 2 runners on.  A bad error led to 3 unearned runs in the 3rd, but credit Mark Teixeira for hitting the HR and making Oakland pay for their poor D.

- And it didn't stop there.  Robinson Cano led off the 4th with a HR to dead center field, and after Teix inexplicably tried to stretch a bloop double into a triple (and failed miserably), Raul Ibanez doubled to left-center and Nick Swisher homered to left to make it 6-1 Yankees.

- Nova got a little inconsistent with his fastball command the 2nd time through the lineup, giving up a solo HR to Josh Reddick in the 4th and another run thanks to a couple of hits and a sac fly in the 5th, but his offspeed stuff looked very sharp.

- His XBH woes continued to plague him in the 7th, when he hung a curveball to Kila Ka'aihue for a HR that made it 6-3 Yankees.  He made it out of the inning, and overall it was a better outing, but 3 runs and 6 hits allowed against the A's still isn't anything special.

- The offense pounded Ross, but went silent once the game got in the hands of the Oakland bullpen.  They were retired in order from the 6th-8th inning, and had A-Rod's 9th inning single represent their only baserunner after the 5th.

- Rafael Soriano threw a scoreless 9th for the save.  Strangely enough, he still hasn't thrown a 1-2-3 inning this year.