When Curtis Granderson got knocked out of the lineup in Spring Training and then again in May, the Yankee outfield was exposed for how weak and shallow it had become.  After letting Swish walk, the Yanks were left with a light-hitting trio of Gardner, Ichiro, and panic trade acquisition Vernon Wells to hold down the fort.  There was no amount of luck, black magic, or age-defying skill rebound that was going to make Ichiro and Wells productive, above-average hitters for an entire season, and predictably the offensive output of the Yankee outfield took a nosedive.

Enter Carlos Beltran.  Once coveted by Yankee fans and writers alike in the mid-2000s, the Bombers missed out on him when he was in his prime and now have a second opportunity to add him to the mix this offseason.  He's not the 5-tool stud he used to be, and I'm on the record as saying I don't think pursuing him on a multi-year deal should be a top priority for the team, but there's no denying that Beltran would be a major upgrade in right field next year over any and everybody currently under contract. 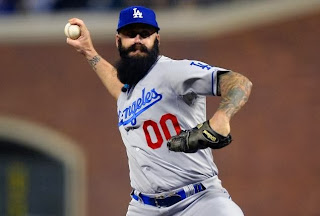 Yankees Shut Out Of The Year-End Awards Finalists

The BBWAA announced the finalists for the major end-of-season awards last night, and in what hardly comes as a shock the Yankees were not represented on any of the final ballots.  They didn't have a legitimate Cy Young contender and the combined uselessness of their parade of rookies this year made them laughably out of contention for Rookie of the Year.

Robinson Cano and Joe Girardi had chances to sneak into the final 3 spots for MVP and Manager of the Year, but in the end the more deserving candidates were selected.  As good as he was with as little help as he had, it's hard to argue that Cano was more valuable or statistically impressive than Cabrera, Davis, and Trout.  And despite keeping things together and staying in the playoff hunt almost until the end, it would have been a stretch to say Joe was more deserving of MOY than guys like Farrell, Francona, and Melvin whose teams actually got to the postseason.

MLBTR Predicting A Big Free Agent Haul For The Yanks

MLB Trade Rumors released their annual top 50 prospects list with predictions on where each player will sign on Monday, and if you were looking for the Yankees to be aggressive and spend big this offseason you'll be pleased with the predictions.

According to Tim Dierkes, when the offseason dust settles the Yankees will have signed Robinson Cano, Hiroki Kuroda, Ervin Santana, Carlos Beltran, Grant Balfour, and A.J. Pierzynski.  That haul wouldn't be quite as flashy as the rumored $300 mil spending spree to bring in Tanaka and McCann, but it would help the team in a lot of key areas.

Cano I'd obviously be happy about, same with Hirok, Beltran for the right price, and Balfour.  Santana and Pierzynski are the wild cards here, as neither has generated any buzz relative to the Yankees' reported offseason plans.  Santana had a nice bounce back year in KC in 2013, but he's been so hot and cold his whole career and his high HR rate wouldn't translate well to pitching in The Stadium.  Pierzynski, while an upgrade at catcher, is well on the downside of his career at age 37 and might not be worth the trouble that his reputation brings.  Still, it would be hard to be disappointed if the Yankees ended up bringing in all these guys.