2013 Season Review: What We Thought We Knew & What We Learned (The Infield) 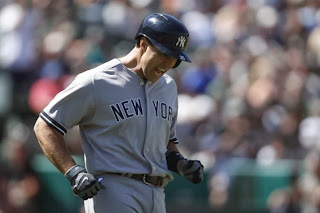 Once the biggest pillar of the team's offensive strength, the Yankee infield came into the 2013 season a crumbling, weather version of its former self and the first place to point to when making a case against handing out long-term contracts to players approaching their 30s.  The Yankee infield was old, injured, and regressing at the corners, older and more injured at shortstop, and heading for free agency while already on the wrong side of the age 30 threshold at second.  That was just in Spring Training too, and none of those descriptions changed for the better once the regular season started.

It was long and difficult year around the Yankee infield, one that I don't think anybody quite saw coming.  I know I didn't back in March when I first outlined what we knew and didn't know about this group.  Even in my attempt to stay grounded with my expectations, I was still way too optimistic about the prospects of 2013 being a good year for the infield.  Lesson learned there I guess, along with these others. 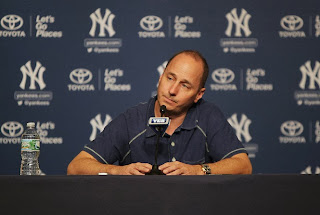 While the best teams in baseball continue to put on a nightly show in the postseason, the Yankees are slowly moving forward with their offseason plans.  They re-signed manager Joe Girardi to a new 4-year deal last week and they are in the process of re-signing his coaching staff to return with him.  The word "stability" was used a lot when Joe's new deal was announced and it's something this organization needs to re-establish going forward, but there's still a lot that needs to be done to achieve that goal.

The coaching staff is just the first piece of the puzzle for the Yankees this offseason, and hardly the most important one at that.  There's a lot of work that needs to be done with the roster and a lot of big decisions that need to be made to determine the direction this franchise takes in 2014 and beyond.  A lot of those decisions probably won't be made until a decision is rendered in the Alex Rodriguez suspension appeal hearing, something the Yankees have no control over.  There's plenty they do control, however, and they'd be wise not to sit on their hands while the A-Rod case plays out.  If Cash is making a checklist of things he can control this offseason, here are the ones that should be the top priorities.

Brian Cashman was a guest on Ian O'Conner's radio show yesterday and he had a lot to say about Alex Rodriguez and the idea that the Yankees would rather have him suspended and his salary off the books than have him on the field next year.  Cash dismissed the idea that the Yankees would prefer A-Rod to be suspended, citing the lack of available and comparable talent to replace him at third base.  Here's the money quote:

"It's not like going down to a Home Depot and pulling something out that you need that's broke and you've got to fix it.  So ultimately from a baseball operations standpoint, taking out all the areas of controversy, having Alex Rodriguez man third base is obviously by far the best option for the Yankees than what the alternatives would be in theory."

You can decide for yourself how honest you think Cash is being when he makes that statement, but there's plenty of truth in the logic.  Yeah, it's easy to say that having that $27 million off the books is a huge help to the Yankees, but that line of thinking assumes they are going to be able to easily replace A-Rod's presence and production and that's just not the case.  He proved he can still play well when he's healthy in his limited time on the field this season.  Losing that production along with losing the salary commitment does work out to a net loss for the Yankees and it's a loss that's going to be more difficult to overcome than people realize.

Posted by Unknown at 8:06 AM No comments: