(Video used courtesy of Barstool Boston)
Darnell McDonald putting the "DUH" in fundamentals there.  Talk about a horrible way to lose a game.  Screw "never make the first or last out of the inning at 3rd base," how about "never make the final out of a one-run game as the tying baserunner by rounding 2nd base too far on a chopper to 3rd."

P.S.- Will I regret this bit of mini-knife turning when the Yankees hit a rough patch in the near future?  Maybe.  But it's too fun to not jump on the Sawx and kick them when they're down after all the time the MSM spent fellating them this offseason.
Posted by Unknown at 2:30 PM 2 comments:

Oh yeah, and they're 0-5 and can't even remember what constitutes a force play and what doesn't.  Even on rain outs the Yankee magic number is shrinking faster than people's interest in Charlie Sheen thanks to the Fraud Sawx.

Guess it's time to kick the "hahht and scrappiness" factor into overdrive, huh?  BAHAHAHAHAHAHA!!!! 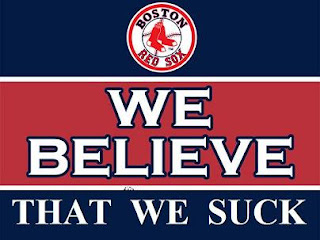 ** UPDATE- 1:55PM- The Sawx continued their losing ways today, falling 1-0 to the Indians and losing the game on an 8th-inning combination of walk, stolen base, sacrifice, squeeze bunt.  On behalf of Yankee fans everywhere, I just want to say thanks to the Sawx for that.  That jokes just writes itself.  **
Posted by Unknown at 10:14 AM No comments: