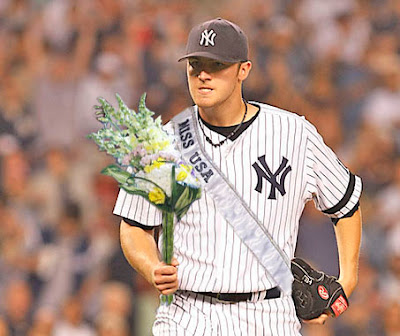 So NOW Is It Time To Call Up An Outfielder?

"We’re going to see where he’s at after today. We’re starting to get to a point where Thursday might be a little doubtful just because he has to go play a game or two.”- Girardi on Brett Gardner

Maybe it's time to bite the bullet and call up Dewayne Wise.  The schedule is getting a little easier, so the 13-man bullpen isn't as big a necessity, and this 2-man bench thing with multiple catchers in the lineup and guys with no business playing the outfield out there playing the outfield doesn't seem to be working. 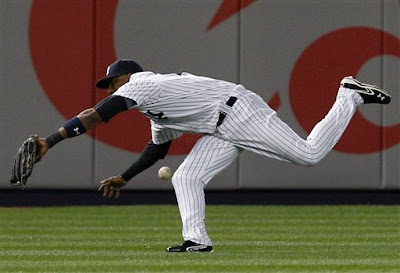 (Derpity-derp!  Courtesy of The AP)﻿

Phil Hughes' spot in the rotation seems safe for the time being.  The axe already fell on Freddy after his last poor outing, and with Andy still a week or so away, Phil was likely going to get at least one more start after this one.  But with David Phelps getting the chance to shine in Freddy's spot, Phil really needed a good start last night against Baltimore to attempt to secure his spot long term.

- I damn near fell down dead in the middle of my apartment when Hughes struck out the first batter of the game swinging on a curveball and thought maybe Phil was going to man up tonight.  Boy, was I wrong.  A couple of poorly-placed fastballs up in the zone to Chris Davis in the 2nd and J.J. Hardy in the 3rd led to an early 3-1 lead for the O's.  No matter what happened from then on, Hughes' spot in the rotation was dead as soon as Hardy's shot landed.

- Outside of the latest C-Grand home run in the bottom of the 1st, the Yankee offense was relatively lifeless against Brian Matusz through 6 innings.  They made life easier for him by swinging early in the count way too often, no instance worse than Robinson Cano's 1st-pitch pop out to end the 3rd with runners on 2nd and 3rd, but Matusz was pretty good.

- Hughes recovered from his early struggles to make it through 5.2 without allowing any more runs, but Joe's lack of faith in him continued to be exhibited when he removed Hughes after a HBP with 2 outs and nobody on.  Hughes had been pitching well, but was given no leash, and his night ended in the 6th.

- It was a big pile of suck after Hughes hit the showers, thanks to a pair of hits off of Boone Logan and the abrupt and ugly end to the honeymoon phase of Eduardo Nunez's outfield career on a brutal error that led to 2 more runs and a 6-1 Baltimore lead.

- In consecutive at-bats in the 6th and 7th innings, Alex Rodriguez had a leadoff bunt single and a 1st-pitch pop out to the catcher with the bases loaded.  I've got nothing for that.

- Things got a bit hazy for me after the A-Rod out to end the 7th, but I distinctly remember D.J. Mitchell coming on in the 9th inning to make his Major League debut.  As a big D.J. Mitchell fan, I'm obligated to mention that and to point out that he worked a scoreless frame with 1 K.

- I certainly wasn't expecting a stinker like this from the Yankees last night.  They had no reason or excuse to lay an egg the way they did, so I really don't know what else to say.  Go get 'em today, I guess.