In a continuation of one of my favorite traditions from one of my favorite Yankee blogs, the now defunct Fack Youk, we'll once again be doing our AB4AR playoff game preview series with a musical theme/connection for each game.  Tonight's is the road, specifically Baltimore, where the Yankees find themselves again despite outlasting the Orioles for the AL East title.  Bud Selig's desire for more dollars has created this screwy 2-3 format for the division series, and the Yanks will just have to roll with the punches and try to get a win tonight to eliminate any potential advantage Baltimore could gain by starting the series on their home turf.  Starting lineups below and keys to tonight's game after the jump. 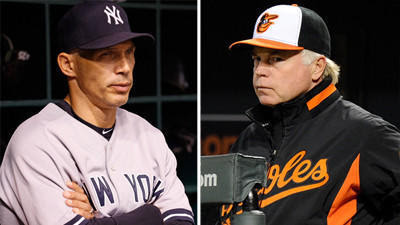 Truth be told, it didn't take a lot of time to come to this conclusion.  I've felt the Yankees are the better team all along and I still think it's a matter of time until the rabbit's foot Baltimore has been carrying around in its back pocket all season falls out.  And if you're wondering why I haven't said boo about the 2-3 setup for this series that starts the Yankees out on the road despite having a better record than Baltimore and winning the division over them, there's an answer for that too.  I don't think it's going to matter much after tonight because I believe CC Sabathia is going to come out firing tonight.  I think the extra rest his 2 DL stints gave him is going to do him a world of good this postseason, and I think he comes out tonight and dominates to win Game 1 and set the stage for the rest of the series.
Read more »
Posted by Unknown at 11:00 AM No comments:

And it's got no surprises.  Via Bryan Hoch, the 25-man that the Bombers will carry into the ALDS against Baltimore will be exactly what everybody thought it would be yesterday once Andruw Jones announced he would not be included.  Brett Gardner, Jayson Nix, and Derek Lowe are in; Jones, Chris Dickerson, Cody Eppley, and Ivan Nova are out.