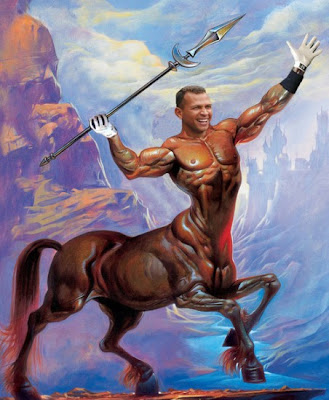 Alex Rodriguez is playing the field like a man possessed in the aftermath of his split with Kate Hudson, and has been on dates with a cavalcade of women in the past two weeks -- including a meeting in Manhattan with old flame Madonna.

On Saturday, he was spotted at lunch with one beauty in South Beach and then took another girl out for dinner at restaurant STK that night.

"He has been seeing a petite brunette from New York," the source said. "While he was in the city, he had a private meeting with Madonna at his home. They have stayed in touch and text each other all the time.

"He has also been hanging around with the girls from Wilhelmina Models in Miami. He picked out a curvy blonde from their books and took her to the Bahamas for a charity event two weeks ago. And he was pretty pleased with himself to be dating two girls in one day last Saturday." (story courtesy of Page Six)


The A-Horse strikes again!! First Madonna, then Kate Hudson, now a whole gaggle of bitches at the same time. Well, I can't say I approve of he and Madonna, because let's face it, she's old and she might be a dude, but this latest report of The Horse's off-field conquests should be music to Yankee fans' ears.

For one, it shows that his hip has to be fully recovered and showing no ill effects of extra wear and tear from last season. I mean, if A-Rod is banging this many chicks on a regular basis, that's a lot of stress being put on the hip, and if the hip is holding up to that stress then it's a foregone conclusion that he's already in mid-season form. For all we know, this is part of his new off-season strength and conditioning program and if the hip is holding up to this kind of rigorous workout regimen, that I think he's going to be just fine once the regular season starts.

Secondly, this shows that Alex is still in "I'm going to do what I want to do and not give a fuck what the media says or thinks" mode and last year wasn’t just a flash in the pan. This is the new and improved A-Rod and he's going to bang who he wants when he wants. Then he's going to show up at the Stadium and go 3-5 with 4 RBIs and not say shit to Kim Jones about it.

And why shouldn't he be pleased with himself for dating 2 chicks in one day? Most guys can barely pull off dating one chick at a time, and most guys like me who blog like this are lucky to even sniff one chick, let alone date her. Keep up the good work, Alex. This kind of pre-season training is what MVP seasons are made of.
Posted by Unknown at 2:47 PM 1 comment: