UConn: One Foot In The Grave 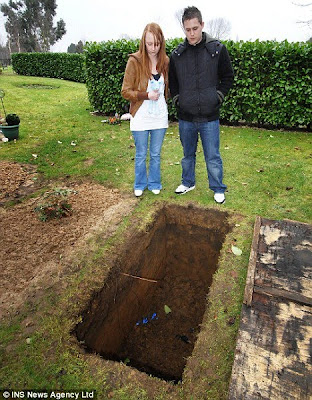 After yet another turnover-committing, 3-point-bricking, foul shot-missing, composure-losing, Stanley Robinson-disappearing performance in front of a strangely calm and stoic (and probably disgusted and confused) Jim Calhoun, the UConn Huskies' season is almost over.  Once again they put on a performance that showed no improvement of their previous mistakes or change in their flawed gameplan, culminating in a blown 2nd-half lead, and they STILL aren't into the meat of their Big East schedule.

Just for shits and gigs, let's take a look back at what I wrote in my season preview a few months ago and spice it up with some special edition director's commentary based on how the season has played out so far:

Charles Okwandu, a 7-1 junior, is an intriguing possibility to replace Thabeet's shot-blocking presence and should get a look early in the season...

The only thing intriguing about Okwandu has been trying to figure out how he managed to fleece the university by keeping his scholarship for 3 years.  And as far as shot blocking goes, fucking forget about it.  This guy gets posted up on a daily basis when he plays as himself in March Madness 2010.

...Calhoun already knows what he'll get from Gavin Edwards and Jonathan Mandeldove, which is nothing.

Surprisingly, here's something I got wrong that actually worked out in a good way.  Gavin has been surprisingly effective on both ends of the floor and has shown more poise and leadership than fellow seniors Sticks and Dyson.

That statement should read: "now a senior and overrated candyass who disappears in the biggest games and 2nd halfs of close games and puts up his best numbers against teams with white 6'2" small forwards."

The key player for this group will be freshman center, Ater Majok.... Having already been with the team and learning the system for a year, he is ahead of the curve compared to other freshmen and shouldn't have the jitters and brain farts that usually come along with being a young player in D-1 basketball.

There's really nothing I can say to try to explain what my thought process was in writing this description of Majok or to justify how absolutely pathetic he has been, so I'll just sum up his performance so far this year with this: 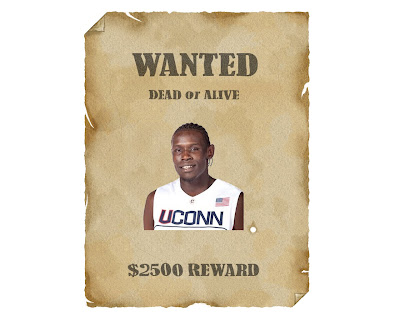 Seriously, somebody plant a bag of weed on this kid so he can get kicked off the team, out of the school, and put on the first flight back to the Sudan.  Even Nate Miles contributed more to the team before he was sent packing last season.  Just an absolute disgrace to the game of basketball and UConn's recruiting process.

Dyson and Walker will be the straws that stir the drink. As they go, the Huskies will go. Both are fearless, hard-nosed players who look to drive and create opportunities at the rim for themselves or their teammates....

Or drive to the rim with their heads down and throw up an over-the-shoulder prayer after passing the ball back and forth to each other for the first 27 seconds of the possession while everybody else stands around and watches them.  When they go like this, the Huskies go nowhere.

Both guys can hold their own shooting the ball, but are not nearly the marksmen that Price was...

Correction: Both guys can hold their own shooting the ball BADLY, and are not nearly the marksman that Stevie Wonder is.

Another complete blunder by me calling this, although at least I got the "Donnell Beverly fucking sucks"-part right.  About the only thing Trice and Smith have done this year is look stupid with their Kanye West-style goofy high-edge mohawks.

How quickly Trice and Smith adjust to the college game will be a key for this team all year long as Calhoun can't afford to run Dyson and Walker ragged every night like he did with AJ Price last year.

It's obvious these 2 haven't adjusted to the college game at all, but it's hard to do that when your coach refuses to play you, instead choosing the option of running his 2 best players ragged and leaving them mentally and physically drained at the end of each game when they miss free throw after free throw.

Overall, this season is wide open in terms of possibilities. This is a team that can be a carbon copy of traditional UConn teams and be a Big East and National title contenders if the veterans step up their games and leadership skills. This is also a team that can struggle to find its identity and be hampered by its inexperience and youth and resemble the 2005 Husky team.

Consider identity not found and resemblance of 2005 team complete.  Strangely enough, the youth and inexperience hasn't come into play as the lion's share of playing time and mistakes have been made by the core veterans and Hall of Fame coach.

Coach Calhoun will have more work to do than he has in past years, both in managing and motivating his seniors and molding his freshmen, but if anybody can do it, he can.

Unless, of course, he decides to refuse to address any of his team's weaknesses, fail to motivate his team to start games strong or manage them to finish games strong, never script a single play when they can't get their halfcourt offense going, and completely ignore his group of freshmen, thereby ensuring their continued uselessness next season when they'll be expected to step up and replace the departing seniors.

Then again, maybe you do...

22-6 regular season, 3rd in the Big East
Semifinals of Big East Tourney
Sweet 16 in the NCAAs

I would laugh reading this if it wasn't so sadly misguided.  Here's the revised predictions:

I was counting on filling a lot of the void of the blog left by the Yankees' off-season with UConn posts.  Now I could give a fuck who they play next and can't wait for pitchers and catchers to report.
Posted by Unknown at 7:27 PM No comments: