Oh My Goodness Gracious!! Kevin Long Is BACK!!! 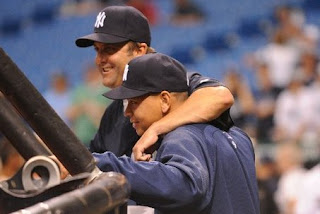 OK, so it's not that dramatic that it needs an over-the-top Waldman-esque intro, but the Yankees bringing back The Mad Batting Scientist, Kevin Long, to his own 3-year deal that mirrors that of Joe Girardi is, while not being overly surprising, a brilliant move by the Yankees.  There might not be a guy more liked or respected in the Yankee clubhouse than Long, and his list of success stories with the Yankee hitters is quite a long one.  You look up and down the lineup and it's almost impossible to find somebody that hasn't seeked out Long's Jedi-like hitting guidance over the last 3 years.

- He helped Teix break out of his early-season slump by opening up his stance to give him more balance and get his hips through the zone quicker and got Teix back on the 30-HR, 100-RBI path in no time.

- He spent 2009 helping Robbie Cano refine his stance to provide better balance through the zone and talk out the extra pre-pitch movement that was slowing him down and then focused on the mental approach side of Robbie's at-bats prior to this season to turn him into one of the most deadly 'middle-of-the-lineup' hitters in the game in 2010.

- He used the same approach with Nick Swisher to help "quiet" his swing in the 2009 offseason, both pre-pitch and during his actual swing to turn Swish from a .230-.240 hitter to someone who hit a career-high .288 this year while maintaining the level of power he achieved by working with Long last season, focusing on subtracting the excess motion from his pre-pitch stance, and using his legs and hips more in conjunction with his arms through the swing.

- And in perhaps his finest hours, at the request of Curtis Granderson, Long completely broke down and built his swing back up piece by piece over 2 days in August, opening up the stance, getting Granderson to keep his hands back a bit, maintain contact on the bat with both hands through the swing, and also doing the same "quieting" of his pre-pitch stance that he did with Cano and Swish.  C-Grand responded by hitting .278./.369/.622 in September and carried that hot steak into the postseason where he hit .357.514/.607 in the Yankees' 10 playoff games with 4 XBH, 6 RBIs, and 8 BB to only 5 K.

In addition to these bigger cases, Long sat down with Derek Jeter in September and got him back on the right track, has spent lots of time working to develop Brett Gardner into an everyday player capable of hitting enough to make his blinding speed a weapon, and even worked with Lance Berkman upon his arrival.  If anybody other than Robbie Cano deserves credit as Yankee MVP for 2010, it's Long.  He gets along well with everybody, pays attention to each and every hitter's individual needs, and has produced such good results that players are going to WANT to come to him for help when they're struggling.

By all indications, the rest of the Yankee coaching staff (Thompson, Kelleher, Tony Pena) will be back in their roles next season with Mike Harkey potentially taking over as pitching coach.  While all those moves (minus Harkey) will be good for the team in 2011, none of them, not even the return of Joe Girardi will mean as much to the players and the Yankees' success next season as the return of Kevin Long will.
Posted by Unknown at 2:39 PM No comments:

Starting Off A New Month The Right Way

... With the new Deftones video for "You've Seen The Butcher."  No Yankee hat for Sergio in this one, but whatever.  I'd rather watch this video than watch the Rangers, the team that was supposedly SOOOOOOOO much better than the Yankees, continue to get their heads kicked in in the World Series, and I'd rather talk about this video than discuss the ridiculous amount of money Jeter is going to get in a few weeks to continue to decline as a hitter and be a guaranteed hit through the hole as a shortstop for the next couple years.

(Yes, I am still bitter about the ALCS loss and yes, I am still upset about it to the point that it's affecting my ability to write.  Deal with it.)
Posted by Unknown at 11:18 AM No comments: