Well how about that?  I thought it was just early rumors, but Ken Rosenthal is reporting that the Pittsburgh Pirates have signed Russell Martin.  There are no known contract terms at this time, but Rosenthal is pretty good with this stuff.  Looks like the Yankees are going to have to find themselves a catcher.  More on this story to come...

** UPDATE- 8:12 PM- Erik Boland reporting that a "source" said the Yankees never made an offer to Martin, which is the complete opposite of what Heyman said.  What the hell is going on?? ** 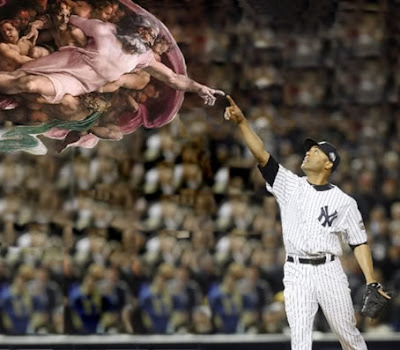 And Operation Old Guys is complete.  A day after the Yankees re-signed Andy Pettitte to a 1-year deal, they followed that up by officially re-signing Mariano Rivera.

Jon Heyman first reported the deal, which will be for a base salary of $10 million, $2 million less than Pettitte got.  Dan Barbarisi reported that the deal does include award bonuses, with rumors of them being near $5 million.  Mo will get another chance to retire on his terms.

For the Yankees, this all but completes their 2012 bullpen.  They'll need a long man, but will have plenty of options for that spot.  There's no guarantee that he'll be as dominant as he's always been, but based just on the numbers, you have to somewhat expect Mo will at least be good.

For the fans, this is another opportunity to watch the greatest closer in the history of baseball one more time. I promised myself if he came back I was going to make sure to go to a game next season to watch him one more time and now I have my chance.  Time to start scouting the schedule...
Posted by Unknown at 7:45 PM No comments:

Any Innings Concerns For 2013?

The 2013 New York Yankees starting rotation is set right now after yesterday's re-signing of Andy Pettitte was made official.  At worst, the rotation should be pretty good again next season and at best it could be very good if everybody stays healthy and a few things rebound from 2012.  Not to rain on anybody's parade or start to poke holes in this group, but it is worth pointing out that there will be a lot of workload questions tied to next year's rotation.

CC Sabathia- Coming off a season in which he had 2 separate stints on the DL, and already has plans being made to limit his innings/pitch count next season.

Hiroki Kuroda- Coming off a career high 235.2 IP between the regular and postseasons in 2012 at age 37.  Unknown how that extra work will carry over and affect him in 2013.

Pettitte- Pitched just 89 total Major League innings last season, and has pitched just 106 total innings in the last 2 calendar years.  Unknown how many innings he can pitch over a full season.

The only guy in this group without innings concerns is Ivan Nova, who was the least effective starting pitcher in the rotation last season.  It's not time to raise the red flag on this or anything, just something to keep in mind going in ST next year.
Posted by Unknown at 12:42 PM No comments: 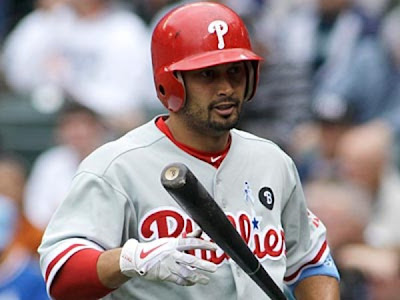 In addition to muddying the waters of the Russell Martin contract situation, Jon Heyman also listed the Yankees as one of several teams interested in free agent outfielder Shane Victorino. Victorino, 32, is coming off a down year that saw him traded from his longtime team in Philadelphia out to Cali to finish the season with the payroll-bloated Dodgers. I’m just going to get right to the point and say that I want absolutely no part of Shane Victorino on the 2013 Yankees. And here’s the kicker, I have absolutely no reason why. I’m not sure what it is about him, because it’s not like he’s a shitty baseball player, but I’ve just never been much of a Shane Victorino guy. It’s completely irrational and I’m the first one to admit it, because Victorino could actually be a good fit for the Yankees.
Read more »
Posted by Unknown at 8:26 AM No comments: