This Week In WTF

With rumors flying left and right about the Soriano signing being influenced by ownership, Randy Levine, and even Mariano himself, there's no shortage of serious topics to discuss this weekend.  Battle lines between Cash and the owners could be being formed again, and that would certainly not be good for the future of the Yankees, but there's something even more important than that situation that needs to be addressed. 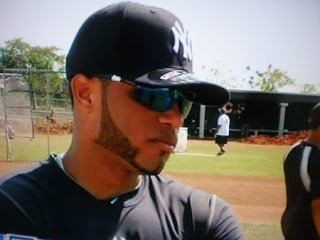 What in name of Christ is going up with Robbie's facial hair?!?!  Good lord, that is hideous!  He looks like some kind of campy villain in one of those shitty Jason Statham action movies.  The only logical explanation for that has to be that Cano is getting an early start on his David Ortiz costume for Halloween this year, and any other explanation is simply not acceptable.

I know we've got a few months before we have to worry about seeing that every day, but come on, Robbie.  Clean that shit up.
Posted by Unknown at 1:50 PM No comments: