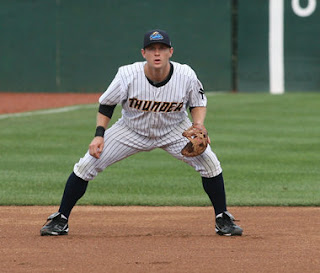 As we move forward from the first third of this year's rankings, the faces start to become a little more familiar.  9 of the 10 players included in the middle section of this year's Top 30 were on last year's list.  They also start to become a bit more experienced, with 9 of the 10 having played in a full-season league last year and 7 of the 10 playing in at least 1 game at the Double-A level or higher.  There's slightly less upside in this group than in the group of 10 from yesterday, or at least upside that's a little better known, but there is also more polish and polish is what I'm looking for to know that a player is on the right track.  After the jump, check out positions 20-11 in the 2012-213 AB4AR Top 30.
Read more »
Posted by Unknown at 11:00 AM No comments:

Last Friday, Keith Law of ESPN released his 2nd "MLB 25 Under 25 Rankings," listing who he felt were the top 25 players under the age of 25.  Not surprisingly, the Yankees were not represented on this list, as they didn't finish the 2012 season with 1 player on their active roster who was under 25 and likely won't start 2013 with a single player who falls into that category either.  For what it's worth, they only put 1 player (Ivan Nova) on Law's 1st edition of this ranking system in 2011, and that list was 50 players deep.

The famed "Yankee Way" has not been kind to young players in the past decade, treating them almost as spare roster parts to be used to patch up and fill in weak areas caused by injuries to their older veterans rather than key contributors to a winning franchise.  The Yankees prefer to bring in veteran players, specifically ones they feel fit their system, and for the most part that's been a pretty successful strategy in remaining competitive.  But while they've remained competitive, teams like San Francisco have been winning World Series titles on the strength of their under-25 players, and teams like the Texas Rangers and Detroit Tigers, who both use under-25 players as everyday players, have knocked the Yankees out of the postseason.

The Yankee Way is going to take a hit in the next year with the ownership-imposed payroll cut to get under the luxury tax.  Even mining for the cheapest of 1-year deals, the Yankees are going to have to lean on some of their younger, cheaper internal players, which makes their current lack of those quality under-25 guys all the more glaring.  As important as it is for them to score big with their 3 1st-round draft picks this year, it's equally important for some of their current prospects to have big years and put themselves in position to be everyday or close to everyday contributors in 2014 and beyond.
Posted by Unknown at 7:09 AM No comments: