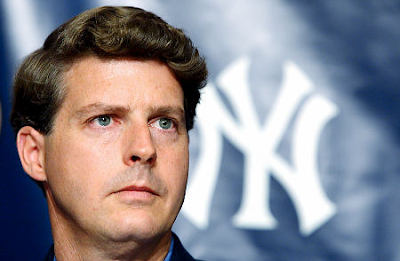 (Congratulations, Hal.  You've successfully handcuffed your GM before the most important part of the offseason)﻿

The Winter Meetings were already going to be a little different for the Yankees this year than in years past. With their plans to get below the self-imposed payroll ceiling becoming more real, and their early offseason actions being more strongly geared towards that one goal than ever, the days of the big, bad Yankees breezing into Nashville and stirring things up with their rumored connections to all the big names appear to be over, at least for the next couple offseasons. But with last night’s bombshell of Russell Martin signing with the Pirates, the entire landscape of the remainder of this offseason has shifted dramatically for the Yanks. While they did make very good progress in reloading the pitching staff, there are still a lot of gaping holes in the lineup and fewer quality players with which to plug them. I think the Yankees always anticipated that they’d be able to re-sign Martin, and now Cash will have to adjust his whole approach to next week’s meetings to cover for the loss.

But what is that approach going to be? What was it even going to be in the first place? The Yankees are notorious for saying one thing and doing another during the hot stove season to keep everybody off their trail, but so far this offseason has been one in which their words and actions are both perfectly aligned. They said they were going to address bringing back their own FA pitchers first and they’ve done that; they said they weren’t interested in doing multi-year deals with position players and they’ve stuck to that, in a much bigger way after last night.

Chances are Cash and Co. were going to use the Winter Meetings as a way to gauge the trade market and see if there was something out there that worked for them, while also laying the groundwork for a few small deals to add more pitching depth. With right field AND catcher being huge areas of need now, that should ramp up their efforts to seriously investigate the trade market since there isn’t much in the FA pool that fits their budget.

And with the rest of MLB seeing what’s going on and how the Yankees are going about their business, those trade talks could go down differently than they may have if New York was still operating under their normal business plan. Teams can already be a little more aggressive with free agents they might be interested in knowing that they aren’t going to get major competition from the Yankees and their usually fat checkbook, and they can be more aggressive with the Yankees in trade talks if Cash engages them. The Yankees are at a disadvantage here, needing to fill positions cheaply and also wanting to do it with good players. Teams can up their asking price for return trade packages and put the pressure on the Yankees to make the decision, knowing that there aren’t a lot of other options out there if the Yankees decline.

As far as those options go, the contract Martin signed yesterday all but ended any chance of the Yankees getting A.J. Pierzynski or Mike Napoli on a 1-year if they are interested in one of those guys. Pierzynski might be older and a jerk, and Napoli might not be a full-time catcher any more, but both of them are better offensive players than Martin, at least based on recent performance, and Pierzynski is coming off a career year. If Martin can get 2 years at $8.5 mil per, there’s no reason why Pierzynski and Napoli can’t get at least that. And if the Yankees weren’t willing to spend that on Martin, why would they be willing to spend it on somebody else?

The Yankees were already going into the Winter Meetings with one hand tied behind their back. They’ve sacrificed their greatest strength to save a few million future bucks, and now they’ll be without most, if not all, of their bargaining leverage when it comes to potential trade partners because they’re coming from a position of need rather than want. The situation the Martin signing put them in is a strange one, needing to be active but not having the tools with which to be active, and the chances of Ninja Cash pulling off another secret trade took a major hit. The Yankees are exposed right now, everybody knows it, and I think it’s going to hurt them next week at the meetings. I don’t know what they are planning on doing next week, but they need to do something.
Posted by Unknown at 12:00 PM