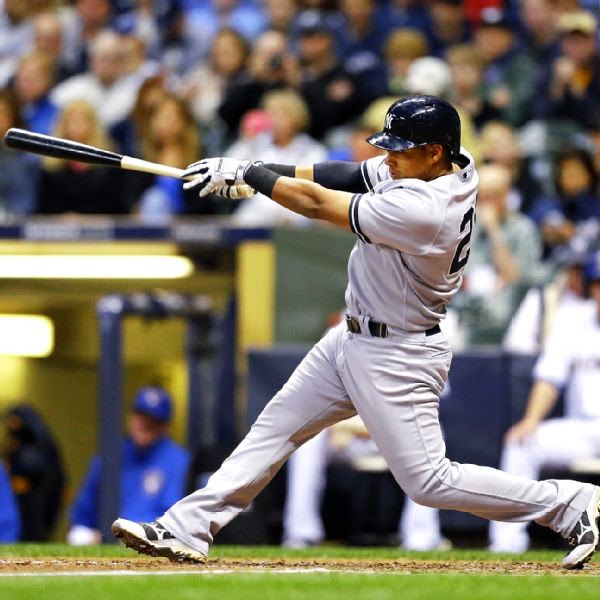 
The issues in the middle of the order are the bigger and more critical ones to be sure, but the Yankees haven't been getting much out of the 2nd spot in the lineup, one of the most important when it comes to generating runs.  Derek Jeter's recent slump, 3-hit night last night aside, has created a dead zone in between whoever's leading off on a given day and whoever's hitting 3rd.  His GB tendencies create the opportunity for more rally-killing double plays when the leadoff guy does get on and his inability to get on base makes it difficult to start any rallies when the leadoff guy doesn't.  Plugging Solarte into that spot and bumping Jeter down in the order solves both of those problems.

Not only has Solarte impressed with what he's done when he's put the ball in play, he's shown himself to be very adept at generating value out of his at-bats even when he doesn't.  His 11.5% BB rate is second on the team behind Mark Teixeira and his 11.5% K rate is the lowest out of everybody not named Brendan Ryan, who has 2 plate appearance.  He has demonstrated a very keen knowledge of the strike zone, the patience to not expand it early in the count, and a very strong knack for putting the bat on the ball.  All of these things would fit nicely into the 2-spot.  They would allow Joe to play the hit-and-run game more with his speedsters on first, give them more time to steal bases while Solarte takes pitches, and better set the table with runners in scoring position for the middle of the order.  It's almost stupid how simple it is.

Of course, it's not a move that's going to be made because Joe has yet to show any willingness to move Jeter out of the 2-spot or even hinted that it's something he's considering.  We already know that Jeter isn't going to volunteer to do that either, so for now Solarte's efforts will remain un-maximized as he hits in the 6th or 7th spot.  He's a better fit to move Ellsbury along the basepaths hitting behind him and a better option as a table setter for Teix hitting in front of him, but he isn't Derek Jeter and that's his biggest problem.

Solarte's .357 BABIP remains a tick high enough for there to be some good luck on his side padding his numbers.  Because of that and because of his long MiL history without getting a call up, I guess there's still reason to think he'll fall apart.  But at this point, the sample size is large enough to say that there's legitimacy to his results.  You can BIP luck your way into a good batting average.  You can't luck your way into a solid BB rate and contact skills.  Solarte has displayed everything needed to be an effective number 2 hitter in his 131 plate appearances.  It would make sense for Joe to move him up there to give his best statistical hitter more at-bats while he's still hot and give his team a better chance to score more runs.
Posted by Unknown at 2:00 PM

I sure hope this works out better than your idea to have Aceves replace CC. Would HATE to jinx the best hitter on the team.