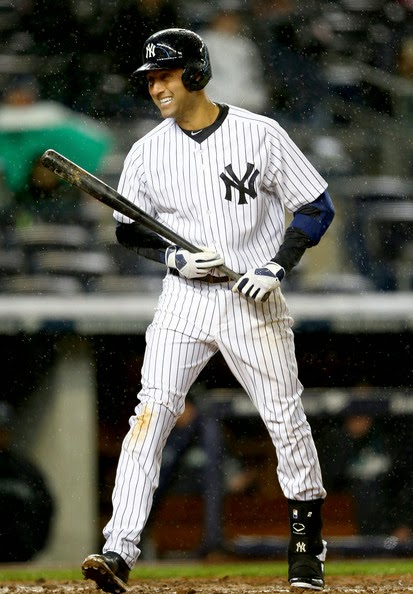 
Maybe not as much as the numbers might make you think.  Take a look at Jeter's spray chart since Friday, April 25th:

That's a pretty clear concentration of balls getting taken the other way, the classic Jeterian approach and the one we've seen him use a lot already this season.  There's also an almost even split between groundballs and flyballs there, which shows that Jeter is getting some loft to his swing.  If he were really worn down, we'd most likely see more grounders and more of those grounders getting lazily pulled to the left side.  That Jeter can maintain his "stay back" approach and hit the ball to right suggests he isn't changing the way he goes about hitting to compensate for tired arms or legs.

He's also made some fairly good contact in this 6-game sample.  He hit a couple balls on the screws for outs earlier in the week and there's one out in the right-center field gap that's located near where most of his hits have landed.  There's also a couple deep outfield outs right on the warning track, so Jeter's poor showing at the plate appears to have a little bad luck and instances of just missing a ball mixed in with the grounders and strikeouts.

The decision to rest Jeter yesterday was a smart one by Joe.  He really didn't look good at all on Friday night and 14 innings is a lot to play any 40-year-old at any position.  It will be worth watching how his swings and contact look today after the day off, but I don't think there's reason to get overly concerned about Jeter right now.  He's still hitting the way he wants to hit, he's making decent contact, and he should have Brendan Ryan back to back him up later in the week, which will allow Joe to give him a little more rest more regularly.
Posted by Unknown at 10:03 AM