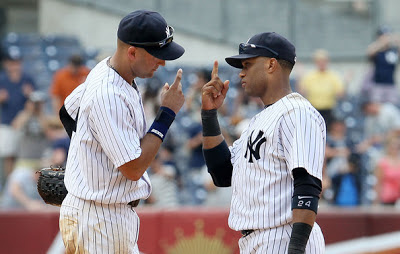 With Mo making his customary late arrival yesterday, all the pitchers and catchers who were invited to participate in Spring Training are now in camp.  And believe it or not, they're actually pitching and catching.  The remaining members of the ST invite list, the infielders, outfielders, and designated hitters, are scheduled to arrive on Sunday to complete the squad and get ready for the first Grapefruit League game of the preseason a week from Saturday.  Continuing our rough run-through of the players participating in big league camp this year, here are the infielders we can expect to see on Sunday.


Mark Teixeira- No more trying to change his approach or his swing this season.  Teix has declared that he's going to be who he is and continue to swing to pull and swing for power.  He's also fresh off his candid comments to Dan Barbarisi about being overpaid and transitioning into the decline years of his career.  Those aren't reassuring words for Yankee fans to read, as Teix is going to be looked to for a bounce back year from 2012.  Whether he can do that or not remains to be seen, but hopefully he can at least stay healthy enough to play 150 games.

Robinson Cano- The story hasn't changed for Cano the last few seasons.  He's the best second baseman in the game, the best player on the Yankees, and the torch carrier for the offense.  What has changed is his contract situation, and that will be the major talking point that follows his every play this season as he and Scott Boras look to score big on the FA market next offseason.  Before that, he'll continue to anchor the heart of this year's lineup and make another run at an MVP award.

Derek Jeter- The biggest question in camp is will Jeter be ready for Opening Day?  He's making progress in his rehab, but as mentioned earlier in the week he is still a long ways away from full game activity.  Jeter's 2012 season was incredible for a player his age, and he probably wasn't going to replicate that at age 39 even if he was healthy.  Now that he's coming off the ankle injury, the most important thing is getting him back on the field and getting him 100% healthy.

Kevin Youkilis- The newest member of the infield, added out of necessity and not desire, Youkilis is also working hard to prepare himself for what he hopes will be a bounce back season.  Age has been less kind to Youkilis than it's been to Teix, and Kevin Long has already started revamping Youkilis' batting stance and swing to bring back some of the pop to his game.  Youkilis is also an injury threat, and the Yankees at least need him to stay healthy and on the field while A-Rod recovers from hip surgery.

Eduardo Nunez- The odds-on favorite to win the utility infielder job, Nunez has another golden opportunity to carve a future niche for himself in the Yankee lineup.  All the tools are there, and he's still got youth on his side, this is the year that Nunez needs to either put it all together or the Yankees need to move on and look elsewhere for Jeter's eventual replacement.  The name of the game is always defense with Nunez, and that's a game he needs to figure out in 2013.

Travis Hafner- signed exactly two weeks ago to a pretty modest contract, Hafner will be the primary DH in this year's lineup, at least as long as he can stay healthy.  His skill set is a great fit for this lineup and Yankee Stadium, and 80-100 games played would be a huge boost.  He's a no-go in the field, though, and is an infielder in name only and because I wasn't doing a separate preview post for just DHs.

Dan Johnson- The backup lefty DH option to Hafner and one who's actually capable of playing the field, Johnson should get a long look in camp and can actually be stashed in the Minors as injury insurance for a few months, something that the Yankees don't have the luxury of doing with a few of their other MiL contract signings.

Jayson Nix- The backup option for utility IF to Nunez, Nix re-signed with the Yankees on a MiL deal pretty early in the offseason, choosing to stay with the organization rather than look elsewhere for a chance at a guaranteed roster spot.  He can play more positions better defensively than Nunez can, but his offensive ceiling isn't as high.  One way or another, he'll be on the Yankee bench at some point this season.

Corban Joseph- On the 40-man as the unofficial backup to Cano, Joseph will get a longer look than before in camp after a breakout 2012 season in Triple-A and because of Cano's impending free agency.  He might not be quite ready for Major League pitching yet, and his defensive range and arm are limited, but Joseph can be a good Major League player in time.

The Rest- Not a lot of value in this group.  Most are mid-level MiLers just here to fill spots on split-squad lineup cards.  Maybe Dr. Long will get a chance to work with Cito Culver to try to bring his offensive game up to speed, and maybe Jose Pirela will do enough to keep his prospect light lit.  The biggest name of the remaining bunch is David Adams, who will be a bit behind schedule because of a back injury, but will not miss ST completely as first reported.
Posted by Unknown at 7:29 AM