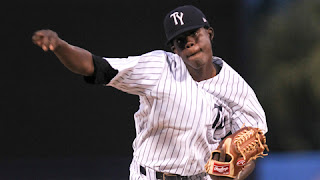 Just because injury problems forced him from the Top 30 doesn't mean Stoneburner is completely useless now.  I called him intriguing as a reliever this season and I meant it.  FanGraphs prospect guru Marc Hulet scouted Stoneburner and had a very positive report on him late in November, praising Stoneburner for his athleticism on the mound, aggressiveness in attacking hitters, and ability to locate down in the zone.  His stuff is still above average, and at 25 Stoneburner is already in the twilight of his prospect career.  Even with injury concerns he is a candidate to move quickly if he performs well as a reliever in 2013, and there always exists the chance that his stuff will play up in a relief role where the wear and tear on him can be limited.  A 2014 arrival in the bullpen is not out of the question if he can stay healthy.

When you're playing on a Low-A team with Sanchez, Williams, Austin, Gumbs, and a few other big prospect names, it's easy to get lost in the shuffle.  That's what happened to Ben Gamel, at least until most of those guys either hit the DL or were bumped up to High-A mid-season.  But once they were gone, Gamel got a chance to step into the spotlight and didn't disappoint in a full season at Charleston.  Gamel hit .306/.342/.394 for the season, and despite not showing much power he still rates high for his contact skills, defense, and athleticism.  Gamel has shown the ability to work counts and take walks in the past, making his low 4.8% BB rate this year easier to chalk up to increased aggression at the plate to make up for the loss of the big bats in the lineup.  He's still only 20 years old, and if he refines his offensive game he could profile as a poor man's Brett Gardner in the Majors.

Few players in the Yankee system are as tantalizing or as frustrating as Ramirez, a soon-to-be 23-year-old pitcher who seems to flip-flip back and forth between being praised for his electric stuff and criticized for his continually spotty command.  He made good strides in the command department in 2012, cutting his BB/9 down to 2.74 while striking out 94 batters in 98.2 IP, but there were some health problems that limited his innings count again, making it 3 straight years that he's failed to throw more than 115 innings.  The Yankees also compounded his innings count problem by using him as a reliever a few times late in the season, but overall it's fair to say that Ramirez's 3.19/3.28 season in 2012 was his best to date.  Look for him to open 2013 in the Trenton rotation with a chance to crack the Top 30 if he can stay healthy and continue to develop better command of his stuff.

Pinder didn't have far to fall from last year's 29th spot, and he's still very much a part of the upper echelon of Yankee relief prospects.  I mentioned yesterday that Pinder's numbers took a hit from their 2011 levels, and most of that was due to a rough start to his 2012 season that saw him give up 15 ER and 14 BB in his first 17 appearances.  For a pitcher jumping from a SS league to High-A ball, that's understandable, and once Pinder adjusted to the level of competition he was very good.  He allowed just 2 ER while striking out 31 in his final 23 appearances, including 5.1 scoreless innings over 6 appearances for Trenton, where he will start the 2013 season.  He'll likely always be overshadowed by Mark Montgomery, but Pinder is very much on the radar for a late 2013-early 2014 call up.

For a pitcher who needed just 3 seasons to advance to Triple-A, Chase Whitley doesn't get a whole lot of ink in the blogosphere and that's a bit surprising.  He's big, he's got swing-and-miss stuff, and he's shown that he has versatility as a reliever, with the ability to come in and get 1 or 2 outs or pitch multiple innings.  Whitley was bumped up to Triple-A early in 2012 and more than held his own there, pitching to a 3.25/3.70 slash with 66 K in 80.1 IP and posting a 2.80 BB/9 that was much better than his BB rate in Double-A.  There's a long line of solid relievers who have come from the Yankee system, and Whitley has positioned himself to be the next in line for a call up in 2013.  Montgomery has the flashy numbers and killer slider, but Whitley should be ahead of him in the pecking order as the first to get a shot when the Yankee 'pen needs an arm.

Color me suprised, I figured JoRam was a lock. IMHO being able to hit 100 and starting the year in AA should put you in the top 30 by default.

I had him on the list a couple different times throughout the year, but the injury history, lack of innings, what was essentially a lost year in 2011, and the fact that he hasn't pitched above High-A yet was enough for me to leave him off.

I readily admit that he's got the stuff capable of being a top-flight starter. I just want to see him stay healthy and productive for a full season, and see him do it against better competition before fully committing.