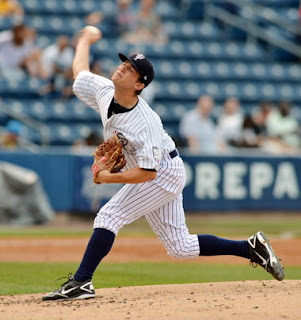 As a college pitcher with some experience, the 21-year-old Black was shuttled quickly through the lower levels of the Yankee system upon turning pro last year, with positive results at every stop.  After making 1 tuneup start in the GCL, Black made 6 starts for the SS Staten Island Yanks, allowing 32 total baserunners and 7 ER in 27.2 IP (2.28 ERA) while striking out 21.  Low-A Charleston was his next stop, and Black made 5 more starts there to end his 2012 campaign, posting a 3.80 ERA and 1.64 FIP in 23.2 IP with an impressive 29 K and 5 BB to boot.  All in all a very good debut, and when paired with his plus-plus fastball a body of work worthy of Top 30 consideration.

What makes me pump the brakes is a look at the rest of Black's pitch repertoire, which isn't nearly as strong as his fastball.  His next best pitch is his changeup, and I haven't read any reports that makes it out to be anything more than an average pitch right now, and he also has below-average slider and curveball offerings that have a lot of room for improvement.  Elite-level fastball velocity can carry a pitcher through the lower levels of the Minors, especially a polished pitcher like Black.  But to get upper-level hitters out and to get Major League hitters out, you need at least one good offspeed pitch that you can throw with consistency, and I'm not sure Black has that right now.

Further compounding my concerns about Black's pitches, and the success he'll be able to have with his fastball against better hitters, is the fact that he's not a very big guy.  Black is listed at 5'11"/175 on FanGraphs, which leads me to believe he might be a little shorter than that in reality, and that could cause problems with his ability to consistently get on top of his fastball and throw it down in the zone.  Smaller starting pitchers also tend to have trouble holding up physically to a full season's worth of starts, so between the small stature and unrefined offspeed stuff, Black could end up being converted to a relief pitcher.

For now, though, all signs point to him staying a starter to begin 2013, and he'll most likely be assigned to either Charleston or Tampa to open the season.  The Yankees are reportedly very high on him because of that velocity, and Black himself confirmed last week via Twitter that he will be invited to big league Spring Training.  My guess is that the Yankee decision makers want to see this heater for themselves and maybe make an early determination of whether they think he can develop enough good secondary stuff to stay a starter long-term.  I think he should at least be given an opportunity to, but that's not my call to make.  Once that call is made, and Black's career path is more easily definable, he's very likely to appear on next year's Top 30.

** For more on Black's background and for a more detailed scouting report, check out Mike Axisa's "Prospect Profile" post from last week. **
Posted by Unknown at 4:00 PM