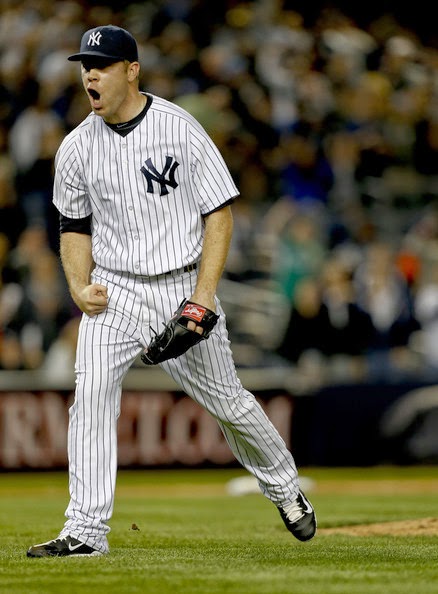 
My favorite part about how well the Yankee staff has pitched in these first 15 games is how under-the-radar their performance has been to the naked and uninformed statistical eye.  They've allowed 54 runs, which ties them for 11th in MLB.  Their 3.61 team ERA is 15th in MLB and 8th in the AL.  Their 3.59 FIP is 12th and 5th.  Their 1.9 fWAR is good for 10th and their 12.6% HR rate is in the bottom third of MLB.  At a quick glance, they appear to be a good pitching team but nothing special.

Then you dig a little deeper and you start to see it.  Their 24.1% K rate is 4th best in MLB and 2nd in the AL behind only the Indians.  Their 6.1% BB rate is 2nd best in MLB behind only the Giants and tops in the AL.  Their 3.34 xFIP is 3rd in MLB behind the Giants and Brewers and once again best in the AL.  And to top it all off, they lead MLB in saves with 8 and have 4 different pitchers who've recorded a save in their 9 wins.  When you cancel out the outside factors to pitching results and focus only on the things that the pitcher controls, the Yankees are arguably the best staff in baseball.  They strike a lot of guys out, they walk the fewest, their expected performance is the best in their league, and they've got a deep, flexible bullpen.

And the scary part is that their numbers could look even better.  CC Sabathia has an ERA over 6 but an xFIP of 2.26.  He's striking out almost 10 batters per 9 IP and if literally 3 or 4 plays in his first 2 starts go differently, he's probably looking at a much better ERA/FIP split.  Ivan Nova and Vidal Nuno both blew up against Baltimore last Tuesday and allowed 14 runs in 1 game.  That's over 25% of the total runs the Yanks have allowed.  Cut that down by a third and they are probably top 5 in every statistical category.  Every other team can play the same "what if?" game and spin their numbers to look better too, but in the Yankees' case that spin is the difference between being one of the best pitching staffs in baseball and being THE best pitching staff in baseball.  They aren't being helped by small sample sizes, they're being hurt by them.

The Yankees have put a premium on improving their pitching for what seems like an eternity.  Their last attempt to boost it into the top tier of baseball in the 2008-2009 offseason didn't quite work out, but if these first 15 games are any indication, it looks like they've finally gotten there.  They're big, they're deep, they throw hard, they've got an array of knee-buckling putaway pitches from both the right and left side, they've got flexibility, and they've got a great mix of youth and veteran experience.  I had high hopes for this season, especially for the starting rotation.  Almost a tenth of the way through, those hopes are being met.
Posted by Unknown at 11:30 AM