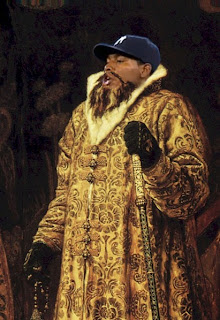 
The curveball was what ate up the Orioles lineup last Friday and Nova leaned on that pitch again last night in 2-strike counts.  His balance of sinker and 4-seamer was also very good and he was able to achieve the right balance of swings and misses (10) and GB outs (12) to keep his pitch count down and stay effective the second and third times through the order.  Finally, it appears as though Ivan has figured out how to harness and use his stuff in a more strategic way.

The timing of Nova's renaissance couldn't have been more perfect for him, as he's pitched better than we've seen since late 2011 at the same time David Phelps struggled and hit the DL.   Nova has earned his spot back in the rotation for at least the foreseeable future and has reminded everybody why the Yankees were high on him in the first place.  When you're a good-sized pitcher throwing and locating 2 mid-90s fastballs with a swing-and-miss curve to back them up, you're going to do alright for yourself.  How long he can keep this up remains to be seen, but what Nova has shown in the last few weeks has been very impressive.
Posted by Unknown at 11:00 AM