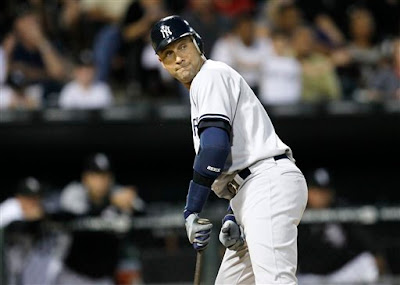 - Jeter: 1-4, 1 HR, 1 R, 1 RBI.  Responsible for the lone Yankee run, still driving to the ball to left field, and had another hit taken away on a nice defensive play by Beckham.

- Hughes: 7 IP, 5 H, 2 ER, 2 BB, 5 K, .  In fairness to Hughes, he did pitch a very good game.  He walked 2 in the first, gave up a dinky bunt single that led to his run allowed in the 3rd, and for the most part controlled the White Sox lineup with a steady diet of fastballs.  Hughes just got outpitched by a dominant Sale.

- Casey McGehee: 0-3, 2 K.  Shouldn't continue to be in the lineup against lefties if that's how he's going to look at the plate.  Give me Jayson Nix instead.

The Yankees get a day off today before heading to Cleveland for 3 games, and they need to start getting it together; injuries, slumps, or no injuries or slumps.  The Rays are on absolute fire and seem hellbent on making this division race real.  A couple of good series followed by a couple of bad series isn't going to get it done.
Posted by Unknown at 7:02 AM