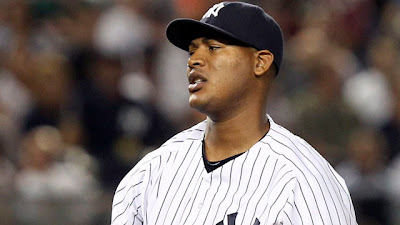 On the positive side, it means the Yankees get to remove the worst pitcher from their rotation, something they surely would have done a few starts ago if they weren't already under the injury gun with CC Sabathia and Andy Pettitte out.  Nova has pitched to a 7.03 ERA and 4.94 FIP in August, and has given up 42 ER in 59 IP over his last 10 starts.  As bad as he's been, there's the conspiracy theorist side of me that thinks maybe this is a phantom DL trip to give him some time to get right and work on his command problems.  Whether or not the shoulder problem is legitimate, some time off will do Nova good and he can throw some bullpens or something as part of his rehab to work out the kinks in an environment that's not negatively impacting the team's chances to win games.

On the other side of that coin, losing Nova, as bad as he's been, during a time when the pitching staff as a whole is unsteady is a blow to the overall depth of the group.  With CC scheduled to come back tomorrow, the Yankees could have bumped David Phelps back to the bullpen to help pick up some of that slack and then had the freedom to send Joba Chamberlain down to work on his command as well.  Now Phelps will slide into Nova's rotation spot, the middle relief corps is still a glaring weakness, and there isn't much in Triple-A that can be called up to help address that issue.  The argument that can be made that even with the addition through subtraction of Nova in the rotation, the pitching staff isn't any better off than it was with him.

There should also be concerns about the shoulder itself and the possibility of Nova having to miss time, be it a short amount or long amount.  There were no mentions of Nova feeling any pain before his last start, but the Yankees went down this same road with Michael Pineda in ST and he ended up out for the season and doing his best Miguel Cabrera driving impression to kill time.  As a young, cheap starter, Nova has value to the team for the future, and the possibility of losing him to a shoulder injury would not be good for future rotation plans.  Shoulder issues that Nova did not disclose, if there were any, could certainly be a contributing factor to his recent poor performance.

The Yankees were in a space with little room to manuever as it was before Nova's shoulder issue popped up, and they still are now without him.  Here's hoping this is just a minor issue and Nova can rest, work on fixing his game, and rejoin the rotation soon.
Posted by Unknown at 10:52 AM