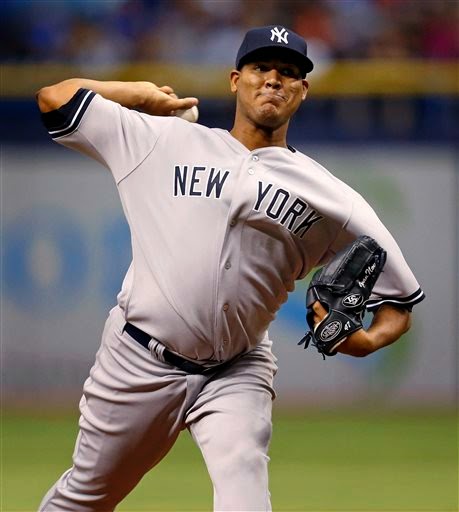 (That image hurts my elbow.  Courtesy of the AP)

Looking at his career history, maybe we should have seen this coming.  The partially torn UCL in Ivan Nova's right elbow that caused him to leave his last start early and landed him on the disabled list is not an isolated incident.  Nova has a history of arm injuries dating back to his early days as a Major Leaguer and a history of command and performance problems that seemed to be precursors to these arm injuries.  In a year where multiple pitchers are going down with major arm injuries each week and have been since late in Spring Training, Nova's name was the most probable of all the Yankee pitchers to get added to that list.

And yet there's still a level of shock that came with the announcement that he had suffered the UCL tear.  Maybe it was the hope that this was going to be the year Ivan put it all together.  Maybe it was the belief on a lot of people's parts (myself included) that he was going to take that next step this year.  Whatever it was, Nova's injury is a crushing blow and one that I fear could have a harmful effect on his career going forward.


- I wasn't firing on any cylinders while I was battling the worst of my stomach flu, but I still had enough mental wherewithal to gurgle out "that's not good" when I saw the report creep across the ESPN bottom scroll on Sunday morning.  Nova was the worst pitcher in the rotation at the time, but he was an important connecting piece.  He was the guy Joe could look to for some length and a big day when CC or Hirok weren't at their best in their previous outing and the guy who could shield Masahiro Tanaka and Michael Pineda early in the year while they got acquainted/re-acquainted with the regular MLB grind.  That bridge is gone now and there isn't another starter in the Yankee system who can come close to replacing Nova from a stuff or experience standpoint.

- Referring back to the first sentence of this post, should we have seen this coming?  I don't think there's any way to truly know if a guy is "injury prone" or not, but the circumstantial evidence doesn't add up in Nova's favor.  Forearm strain in late in 2011, shoulder inflammation and weakness in 2012, and triceps inflammation early last year.  All arm injuries, all around the elbow.  Some might look at that and say it was only a matter of time.

- The strange thing is there wasn't anything prior to him coming up to the Majors that should have made Nova an injury red flag.  He pitched 145.0 innings in Triple-A in 2010 and 187.0 overall that year, 139.1 the year before between Triple-A and Double-A, and 148.2 in '08 at High-A Tampa.  It's not like he made a huge workload jump going from the Minors to the Majors and it's not like he was overworked in the Minors or had any arm problems coming through the system.  Just hasn't been able to stay healthy since he came up.

- If you want to analyze it further, it's worth mentioning the Yankees' decision to scrap Nova's slider in favor of more curveballs and sinkers after 2012.  The slider puts more stress on the elbow than the curveball does and adding the sinker has decreased the percentage of breaking balls Nova throws from 40% in 2012 to about 30% this year.  The Yankees tried to protect his arm after the first few injuries, specifically with the elbow in mind, and he still ended up tearing his Tommy John ligament.  To me, that's another check in the tally box for the unpredictable nature of these injuries and how preventative measures at this high a level are never going to be a foolproof method of keeping pitchers out from under the knife.

- As far as Nova's treatment options go, I don't even think it's a question.  He has to get TJS and he needs to get soon.  The attempts to rest and rehab UCL tears have never worked on other pitchers and in the end all you're really doing by trying them is pushing back the player's return date.  When you factor in Nova's previous arm injury history, it should be a no-brainer.  Get the surgery, get recovered, start rehabbing ASAP, and focus on getting ready for the 2016 season.

- That's the real big bummer for Nova.  The fact that his 2015 is basically a wash now in addition to this lost season.  Next year is Nova's second of arbitration eligibility and he's going to miss a significant chunk of that year finishing up his rehab work.  Whatever time he does spend on a Major League game mound will be spent knocking the rust off and that leaves him with his final arb year of 2016 as a 1-year audition for free agency.  Unless he really blows everyone away then, he's not going to be looking at much on the open market.  This injury could have cost Nova tens of millions of dollars.

- We don't even know what kind of pitcher he'll be when he comes back.  Tommy John has evolved to the point where it's more of a help to a pitcher's career than a hindrance, but every player's body is different.  Nova's right arm has had a lot of problems over the last 4 years and attempts to change his pitching style to accommodate that haven't helped.  What additional changes will have to be made when he comes back from surgery?  Will he still be able to throw his curveball with the bite he had before?  Will his fastballs suffer any loss of velocity or movement?  Nova has already gone through a couple transformations.  After this major injury, you have to wonder what else will change and how that will impact his effectiveness.

- The positive side of that from the Yankees' perspective is that they'll have full control over Nova's rehab work and will be the only team with firsthand knowledge of how his rehab went, how he looks when he starts to throw and pitch again, and how he projects going forward.  They'll save a few bucks on him in arbitration over the next 2 years and they'll be able to make the most informed decision on what to offer him and how much if and when he hits free agency.

- This almost goes without saying, but I think that talk of an extension is going to be off the table for a while.  Nova would really have to be a beast in 2016 for the Yanks to entertain that thought.

- How does this impact the rest of the team?  Obviously the 4 remaining starters each become more important.  The need for Tanaka and Pineda to continue their strong early performances becomes much greater.  If I'm considering each pitcher individually, I think CC Sabathia becomes the most important now.  Tanaka and Pineda are always going to have their stuff to fall back on if they aren't commanding and Kuroda is as steady as they come.  CC is the new wild card in the rotation and the Yankees need him to step up.  They need him to continue to show that the changes he's made to his game are real and sustainable and they need him to eliminate the bad innings from his starts.  If he can do that and be what Andy was last year, that would be fantastic and make losing Nova much easier to manage.

- Nova is still a young man at 27.  If he has the surgery soon, he can be throwing again before the end of this calendar year and back on the mound at 28.  In that respect, this is hardly a death sentence for him.  He's also come no closer to answering all the questions about his future, questions that have been present going back 2-3 years.  If anything, he's only added more questions.  An injury like this was the last thing he needed and until he gets back on a mound next year and we see what he looks like, I don't think I can even start to suggest what kind of pitcher he's going to be for the rest of his career.
Posted by Unknown at 12:22 PM