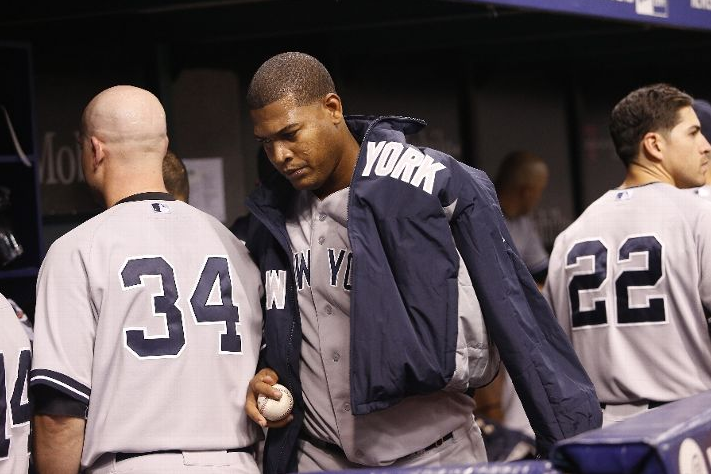 Ivan Nova's Saturday was already a bad one before the injury was announced.  He was up in the strike zone again, getting knocked around the park, and not giving his team much of a chance to win.  His early exit and subsequent UCL tear diagnosis was a stomach punch to him, a sobering blow to what had been a mostly positive start to the Yankee season, and a possible explanation for his early struggles on the mound.

With Nova now out of the picture for the near future and most likely the remainder of the season, the Yankees will have to find a way to cover for that loss.  They appear to have found a suitable replacement for the short-term in Vidal Nuno, but the baseball season is a long one and it's barely over 10% old.  More injuries are all but certain and it's the long-term ramifications of Nova's injury that are now the concern.  The ripple effect of losing Nova could extend from this past weekend into the final month of the season in a variety of ways, all of which the Yankees will have to consider and be prepared to address moving forward.

Before anybody calls me crazy for suggesting that those plans go out the window, please take note of the word "slight".  Obviously keeping close tabs on the workloads of Masahiro Tanaka and Michael Pineda is a key priority for Joe this year and no injury to another pitcher will or should be enough to blow that away.  I also don't think he's going to start letting CC and Hirok rack up 110+ pitch outings every time they take the hill to try to compensate for a loss in rotation depth.  But I do think he might think differently about leaving them out there for a batter or 2 longer in situations where it can help the Yanks win.  If Tanaka or Pineda are at 90-95 pitches and there are 2 outs, Joe might give them 1 more batter to let them finish the inning before going to the 'pen.  If they finish an inning at that pitch count, he might let go back out to start the next inning and try to steal an out or 2.

The goal is still to make the postseason and win a championship here and every game counts towards that goal.  The loss of Nova makes the rotation as a whole weaker and that means more pressure and responsibility on the remaining 4 starters.  If Joe feels like his starters give him a better chance to win late in a close game, we might see him stick with them a little longer and save his bullpen for the 5th starter.

As far as that bullpen goes, I think it's a foregone conclusion that more changes are going to come as a result of Nova going down.  While we can intelligently guess that Nuno is going to slide into Nova's rotation spot, nobody from the front office or coaching staff has come out and said that yet.  Even if he does get the nod, Nuno is going to have a much shorter leash than anybody else in the rotation and there's no way of knowing how long he'll hold down the job.  It could be him for a while, it could eventually be David Phelps who steps in again, or it could be a tandem combination of both of them like Mike suggested yesterday.  If that happens, the middle relief group becomes more important.  Betances will have to step up and be more consistent to cover for Phelps when he's not available.  If he can't, Joe will have to find somebody who can.  Even if Joe doesn't go the tandem starter route again, some things in the 'pen are going to change because he's going to want to have more relief support ready and available any time his 5th starter is on the mound.

A Look To The Trade Market

Nuno was very good in his spot start on Sunday.  He definitely bought himself some more time to prove he can handle the job.  But if you took a straw poll of the Yankee shot callers right now, I bet the majority of them would say they aren't comfortable with the idea of Nuno making 30 starts in place of Nova.  With Phelps in a relief role and Adam Warren now settling into an even shorter relief role, the organizational depth behind Nova has grown a bit thin and that means the Yanks may have to look outside for help.  It's a little early to start speculating about who will or won't be available.  For all we know, the pitchers the Yankees would be most likely to target could all get hurt themselves in the weeks or months to come.  What we can be sure of is that teams are going to fall out of the postseason races this summer and when they do, some of them are going to be sellers.  As long as the Yanks aren't way out of the AL race, they'll be open to all trade possibilities that provide an upgrade over Nuno.

Despite how poorly he was pitching, the loss of Nova is a big blow to the Yankees.  The greatest strength of their rotation this season was the fact that they had 5 guys capable of coming out and shutting any team down on any given day.  That's gone now, and the soft underbelly of their internal rotation depth is starting to be exposed.  Nuno is going to get his shot to stick in Nova's spot and he should.  The guy has only given up 4 runs in 4 career starts.  But the loss of Nova will be felt across the entire pitching staff and it will have to be a group effort from the players to the manager to possibly the front office to make up for it.
Posted by Unknown at 4:00 PM