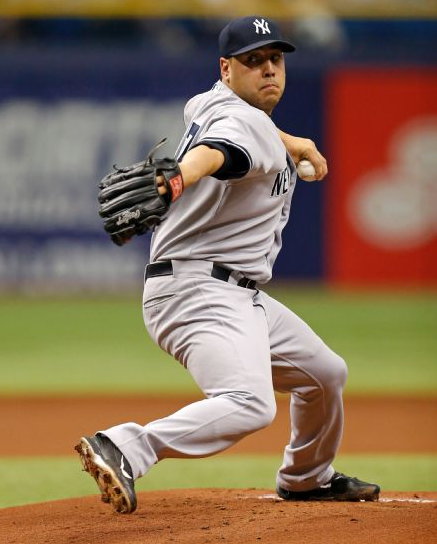 It isn't a large or meaningful sample size by any stretch of the imagination, but Vidal Nuno does have a very good history as a Major League starter.  He allowed just 4 runs in 3 spot starts last May and stepped up to toss 5 shutout innings against a red hot Tampa Bay lineup yesterday.  With Ivan Nova on the DL and likely looking at season-ending TJS, the Yankees are going to need a full-time replacement in the starting rotation and right now Nuno looks like the best man for the job.  He's got a track record of being a strike thrower, he mixes pitches well, and his offspeed stuff is good enough to strike out Major League hitters.

The Yankee decision makers have today to look at other alternatives, but there really isn't much else to consider.  Adam Warren is a short reliever now, David Phelps isn't stretched out to nearly enough pitches to be a viable starting option, and there's nobody in Triple-A who's better than Nuno.  After 5 years in the Minors and a couple cups of coffee, Nuno looks like he's finally going to get his big chance.
Posted by Unknown at 8:15 AM