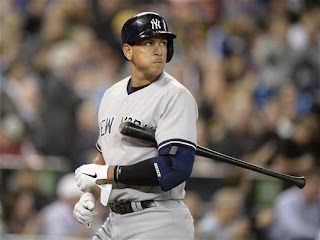 Read what Andy Pettitte had to say after last night's game:

"It’s frustrating. We've got to win. It’s not good, that’s for sure. Go to Boston and get swept, then lose the first game here. We’re playing terrible, and it’s not good. It’s a bad time to be doing that.”

And when asked if there was a sense of urgency with the team:

“I hope so.  Obviously when you go and you get shutout, it maybe doesn't look like it, but if there’s not with some of these guys they’re playing the wrong sport, and they’re definitely in the wrong organization."

Not exactly the type of quotes you'd expect from a veteran on a team trying to stay positive and turn things around.  Andy's been on a lot of good teams over the years.  He's played with a lot of great players and been in a lot of winning clubhouses, so he knows when things are OK and when things are not.  For him to be that brutally honest says something.  It says this team is out of gas and maybe they don't have what it takes to complete the run back to the playoffs, from a physical, mental, or baseball standpoint.  It's not like that should come as a surprise now when it's been one of the constant themes of analyzing this team since Game 1.  Andy's been in that clubhouse all year, he knows those guys.  If he felt they had what it took to get the job done, he wouldn't have answered a 'yes or no' question with "I hope so."

Which is not to say I believe the team is giving up.  The results may not be there, but these guys are professionals and I'm sure they're trying as hard as they can to win games.  Sometimes it just doesn't happen, especially when your lineup is full of older, overworked players and sub-replacement level bench bats.   The Yankees have been shut out 10 times after last night.  That's almost 14% of their losses being games that they literally had no chance to win.  Their offense has been hot and cold all season, even the rejuvenation of it in August was thanks to the return of hot and cold hitters like Alfonso Soriano and Curtis Granderson.  They've been in another cold streak these last 4 games and they are't built to snap out of it just like that.

Ultimately, this is the same team the Yankees have been all year.  Names on the roster have changed (a lot), but the makeup of this team has really never changed for better or worse.  They've had an up and down season and somehow managed to defy the odds and statistical projections to stay in the playoff race for 151 games.  Now they're stuck in another "down" phase and there probably isn't enough time left to get another "up" one going to make up ground.  I won't be so bold as to call them done like I did last month and look like an idiot twice.  I'll just say that I don't think there's enough time or talent left to recover from the last 4 games.
Posted by Unknown at 12:00 PM