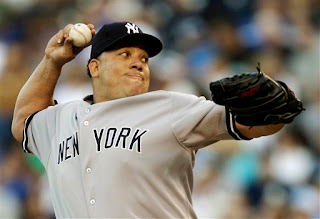 A couple months ago, the 7th inning against the Oakland A's would have been easy street for Bartolo and we would have killed Joe for taking him out.  Last night, that same 7th inning was probably too much to ask for from Bart and it would be easy to kill Joe for leaving him in.  It's understandable that Bartolo would be slowing down with the workload he's had this year, and I'm not going to criticize the guy for it, but it is something that needs to be recognized and addressed by the Yankees and managed properly by Joe moving forward.
Posted by Unknown at 3:52 PM