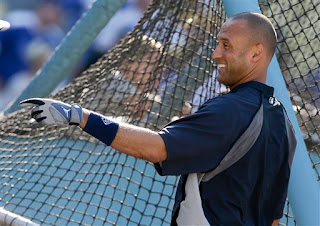 Regardless of what Jeter or the team says publicly, I think if you got each of the key players involved alone and away from the beat writers they'd tell you that they pushed too hard to get Jeter back on the field early in the season.  His ankle was never going to be ready for Opening Day, and even if the quad and calf injuries aren't directly related to that there's really no point anymore in trying to argue that Jeter's comeback from surgery wasn't botched.  He's gotten so banged up this year in only 5 games that he'll probably have to take some time off again when this season ends to rest his legs.  After seeing how greatly those legs were affected this year by not having a regular offseason workout routine, how much more limited is Jeter going to be physically when he comes to camp in 2014?

Take all the superlatives and great moments and championship rings and gift baskets away and what you'll have next season is a 40-year-old man trying to play shortstop in Major League Baseball after basically missing an entire season with leg issues following major surgery.  If that sounds familiar it's because it's a similar scenario to the one A-Rod will be in when he returns from his eventual suspension.  Jeter will only be on the books for $9.5 mil next year, so the dollars and cents aren't a huge problem.  What is is how the Yankees plan to use Jeter to keep him healthy and on the field and what is the contingency plan if that doesn't happen.  I think it's pretty clear by now that this year's plan was not the right one.

The Yankees have gotten a .247 wOBA and -1.4 fWAR from the shortstop position this year.  As discussed before, it's not a position at which they have great organizational depth and that flaw was exposed in a big way.  Jayson Nix is nice as a bench piece, not as an everyday player.  Luis Cruz, Reid Brignac, and Alberto Gonzalez are not even Major League-quality players.  And Eduardo Nunez, despite too many people continuing to praise his tools, is a .260/.309/.367 lifetime hitter with a negative WAR total who has developed a very Cervelli-esque habit of getting unluckily banged up every year.  The Yankees never went out and found a real backup for Jeter this offseason and they're paying the price.  Next offseason's crop of free agent shortstops isn't any deeper and the next Jeter ain't walking through the clubhouse door from the farm system anytime soon.

Nobody likes to watch their favorite athletes go out diminished and broken down.  Unfortunately that looks like it's shaping up to be the case for The Captain in 2014.  He's still weeks away from returning to the lineup, there's no telling how long his legs are going to hold up when and if he does return, and that doesn't spell good things for him looking ahead to next season.  Similar things predicting the downfall of Derek Jeter have been written before and he's come back to make them all look silly.  If he does that again next season and goes out on a high note, I'll gladly point back to this post and call myself an idiot.  Chances are that's not what's going to happen though, and the Yankees need to be prepared.  They weren't prepared for life without Jeter this year and it cost them.  Sooner or later they have to learn a lesson, right?
Posted by Unknown at 4:00 PM