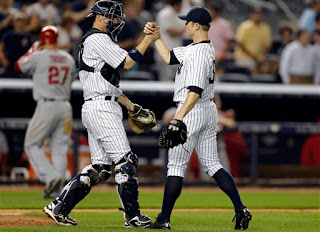 To any reasonably intelligent baseball fan who watched the game last night, it was a prime example of why D-Rob is just the man for the closer job next year.  The at-bat with Trout featured a couple of ball calls that were right on/off the outside corner, the double was a lazy bloop by Josh Hamilton that a younger third baseman with 2 good hips catches easily, and the walk to load the bases was called from the dugout.  Once the bases were loaded, D-Rob jumped into the phone booth like he always does and shut shit down.  He went at Mark Trumbo and Chris Nelson with his fastball and blew them both away.

Those 2 strikeouts were the 24th and 25th consecutive batters that Robertson has retired in bases loaded situations.  Think about that.  He's pitched what amounts to almost a complete game with the bases loaded and hasn't allowed a single runner to reach base.  No close call walks to force in a run, no bloop hits, no sac flies, not a single baserunner.  This type of high-leverage dominance is nothing new for D-Rob.  He's always been at his best when the situation is at its most critical and he's continued that trend in 2013.  He's got a .276 wOBA against with the bases empty this year, a .208 with runners on, and a .185 with runners in scoring.  In 43 batters faced with RISP, D-Rob has given up just 5 hits and 4 BB with 16 strikeouts.

The notion that D-Rob can't close because he doesn't have a strong track record in save situations is ludicrous.  He hasn't had a lot of chances because he's been behind the greatest closer of all time his entire career, and he "lost" the job last year when Mo got hurt mainly because he got hurt soon after.  Robertson has everything a manager would want in a closer.  He's got swing-and-miss stuff (30.8% K rate), he's walking fewer batters than he ever has (7.7% BB rate), he's throwing fewer pitches and working more efficiently than he ever has, and he's at his best when the moment is the biggest.

Don't let the theatrics last night obscure the fact that D-Rob came out and got the job done in a tight spot, a tighter spot than he would have been in had he came out to start the inning like a normal closer.  He's more than up to the task and it shouldn't even be debatable that the job be his in 2014.
Posted by Unknown at 9:49 AM