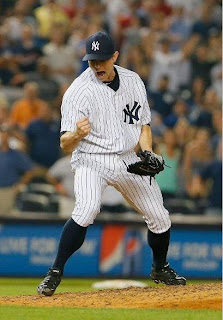 - Kuroda: 8 IP, 3 H, 0 R, 1 BB, 7 K.  Total dominance of an inferior lineup by an on-his-game Kuroda.  He had everything working, he could locate it all to both sides of the plate, and he threw a lot of strikes.  18 of his 24 outs recorded were either groundouts or strikeouts.  When he's on like that, he's a beast.

- C-Grand: 2-3, 1 HR, 1 R, 1 RBI.  Guess he saw what he needed to see on that fastball the pitch before because Curtis crushed the next one.  He could use a hot finish to the season to build some free agent market value.

Back at it again tonight with CC Sabathia back on the hill.  He took a step forward last time out and he'll face Jason Vargas.
Posted by Unknown at 6:39 AM