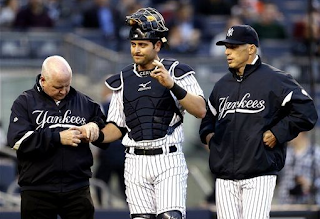 
- First and foremost, you can't help but feel terrible for Cervelli.  Say what you want about his overall baseball skills, but the guy has always been known as a good teammate, hard worker, and it's never difficult to see his energy and enthusiasm when he's on the field.  Cervelli comes across as the type of player who just loves playing baseball, and it's what makes him easy to root for.  He's had injuries derail some of his good opportunities before, he got the rug pulled out from under him last ST when he was sent down to make room for Stewart, and now he has this injury happen right in the middle of a great stretch of play to open the season and right when it seemed like he was about to put a stranglehold on the starting job.  Such a tough break and I really feel for him.

- And make no mistake, his production is going to be greatly missed in this lineup, at least until C-Grand comes back.  He was hitting .269/.377/.500 in 61 plate appearances, and despite his unsustainable early contact rates it was obvious that Cervelli had made strides at the plate.  He was working counts, drawing a lot of walks (13.1% BB rate), and had already hit 3 home runs in 17 games, this after hitting just 5 total HR in his previous 184 career regular season games.  Behind the plate, Cervelli had thrown out 2 of 4 attempted base stealers, and in the games I watched both his framing and pitch blocking looked improved.  It's all based on small sample sizes, but Cervelli has been one of the most all-around productive players on the team thus far.

- If you're one of the people piping up with the "well he shouldn't have had his hand out there in the first place" argument, just shut up.  Don't turn this into something that Cervelli brought on himself.  It was a freak bad luck play and he came out on the wrong side of it.  Period.

- We all know what kind of player Chris Stewart is by now, and by stepping into the "everyday" role that Frankie had been occupying his weaknesses as a hitter are going to be further exposed.  He doesn't draw walks, he doesn't hit for power, he doesn't even really hit for much solid contact.  Joe won't be able to use Stewart in the 6th spot in the lineup like he did with Cervelli.  And for all the talk about Stewart's great defense, he's seemed a little uneven to me this year.  He threw out 2 base stealers last night, but he's also made some really poor throws and let a few weak passed balls get by.  I can't say I'm confident that he'll be an adequate replacement for Frankie.

- Which is exactly why he shouldn't just be given the official starting job.  Austin Romine is going to come up and he's looked healthy and productive (.333/.391/.405 in 46 PA) in Triple-A.  Romine was always the emergency chute option for the Stewvelli tandem and he should be given opportunities to play and show what he can do.  Personally, I'd like to see Joe keep the PT split the same as it was when Cervelli was in and give Romine regular backup reps.  If he proves he can handle the pitching staff and Major League running game, and he hits more than Stewart, there's no reason to not give him more playing time.

- One quick note on Romine, I do think him being called up because of injury and not poor performance does help make this transition a little easier for him.  It's still going to be hectic and he's still going to be nervous, as everybody coming up to the show is, but at least he doesn't come in with that added unspoken pressure of "having to perform" because the other guys weren't cutting the mustard.

- If there's a silver lining to be taken from this, I guess it's that it won't hurt to have Cervelli miss out on 6+ weeks of regular catcher wear and tear.  He'll have to rehab the hand, but it's a broken bone and it will heal. When he does come back, he'll be completely healthy and rested, with no other nagging injuries to slow him down.  That could come in handy later in the season when most catchers are a walking bruise.
Posted by Unknown at 10:38 AM