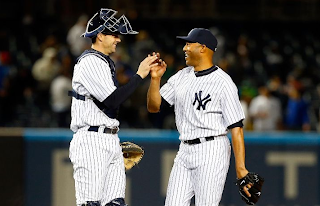 - Phelps: 4 IP, 2 H, 1 ER, 2 BB, 9 K.  Very nice bounce back outing from Phelps in one of the toughest situations he's had to face to date.  His stuff was really working last night.  Good movement on his offspeed pitches, good life on his fastball.  He's going to have to be more economical with his pitch count now - there were a lot of 2- and 3-ball counts in his 4 innings - to provide length, but the Yanks should be confident in Phelps' ability to replace Nova if Ivan has to take a trip to the DL.

Patience: The Yanks made up for the 6 hits by drawing 10 walks last night against Toronto pitching.  Hafner drew 2 and interestingly enough, Chris Stewart and Jayson Nix each drew 2 as well.

The Yanks are in a great position to take this series up 2-0, and they'll send their ace CC Sabathia to the bump this afternoon against fellow lefty J.A. Happ.  I know the matchup doesn't favor him, but I'd like to see Hafner in this lineup today.
Posted by Unknown at 7:54 AM