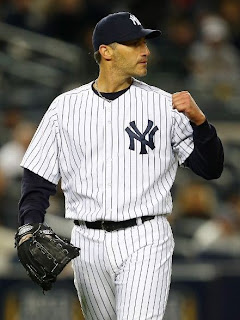 - Pettitte: 8 IP, 8 H, 1 ER, 1 BB, 3 K.  I said it on the AB4AR Page last night that it was vintage Andy and I wasn't kidding.  He was throwing all his pitches for strikes, throwing a lot of strike 1s and working ahead in the count, and dictating what he wanted the Fraud Sawck hitters to swing at.  Fantastic first outing.

The Bombers hit the road for the first time this season, heading to Detroit for a rematch of last year's ALCS. Ivan Nova gets the ball against Doug Fister.  First pitch is at 1:08 PM EST/12:08 Central.
Posted by Unknown at 7:54 AM

What do you think of the Cano shift that the Sox employed during the series?

I think it's smart strategy on their part. Cano has become more of a pull hitter recently, and he's a damn good one, so why not employ the shift and try to get him out of his comfort zone?

That being said, I think Cano is a good enough hitter to adjust if more teams start doing it, and he put some good swings on balls hit the other way in the series.