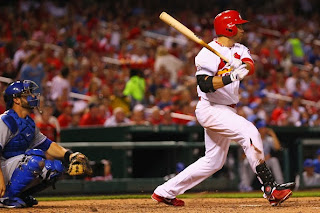 In fairness to Beltran, his downside is a much better downside than those of players like Ichiro and Kevin Youkilis.  He hit .296/.339/.491 (.359 wOBA) with 24 HR in 145 games this season, and he's consistently been one of the best offensive outfielders in the game since the early 2000s.  He does make a lot of baseball sense for the Yankees next season.  He adds power to a lineup that needs it, he adds balance as a switch hitter, and even though he's a fraction of the defensive outfielder he used to be, his deficiencies can be masked some in right field at YS3.  Adding Beltran and plugging him into right would shift Ichiro to the bench as a 4th outfielder where he belongs and most likely jettison Vernon Wells to the waiver wire where he belongs.  None of those moves are bad things for a team supposedly still trying to contend.

Still, there are a lot of risks that come attached to Beltran too, most of them age-related.  He's been sapped of his speed that made him a great outfielder and 30/30 guy back in the day, and his downward trend in BB rate over the last 3 seasons is indicative of a player who may be cheating a bit on fastballs to make up for a loss in bat speed.  Let's also not forget about those knee problems he had when he was a Met.  Beltran has played at least 142 games in each of the last 3 years, but that injury past at this age is a big gamble to take for a team that got taken behind the woodshed by the injury bug in 2013.

And that's where I start to have a problem with this mutual interest.  Not only would the Yankees assume that risk and have to hand out a chunk of change to get Beltran this offseason, they would also have to give up their 1st round pick to do it.  Beltran is coming off a 2-year/$26 million deal with the Cardinals and if you think they aren't making him a qualifying offer, you're crazy.  Beltran is as perfect a candidate for that offer as there is, and from a strategic standpoint it doesn't make a lot of sense to sacrifice a pick to get him.  If the Yankees want to add a 30-something outfielder with power and questionable defensive skills who may be on the verge of losing his bat speed, why not just re-sign the younger Curtis Granderson and keep the draft pick?

More than anything, this report of mutual interest shows what the Yankees have become in the free agent world.  They're no longer the best place to be and the place you go as a declining veteran player to chase a title.  If Beltran wanted to do that, he'd be better off accepting St. Louis' QO and staying there.  The Yankees are the place you go simply to get paid, because they're the team who's always willing to pay the aging veterans.  They did it with Ichiro, they did it with Youkilis, they did it with Hafner, and they'd be doing it again with Beltran.

It's not that Beltran wouldn't be an upgrade next year, it's that he's another in what is becoming too long a line of aging veterans cashing in on the Yankees' new love for name recognition.  There's no way they can move forward as an organization towards a better future if they continue to anchor themselves to these players' pasts.  They certainly shouldn't be letting any opportunities to improve next year's team pass them by, but if adding Beltran is at or near the top of their offseason to-do list, that's a bad sign.
Posted by Unknown at 1:00 PM