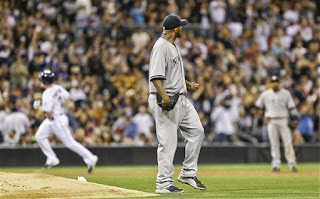 
What We Thought We Knew- The Rotation Would Be Pretty Good

Not only were the projected 5 starters returning to a familiar setting, there was reason to expect at most and hope at least that all 5 of them would be in for seasons that were as good or better than what they did in 2012.  Hiroki Kuroda and Andy Pettitte were as reliable and rock solid a pair of veteran starters as there are in baseball, CC Sabathia was coming off another strong year and was healthier after elbow surgery and some more offseason weight loss, and Hughes and Nova had room for improvement.  If Hughes could develop a consistent 3rd pitch and Nova could learn to work through an order better, there was the potential for 5 above-average starters.

The biggest concern among this group was how many starts they would all make.  Pettitte and Hughes had long injury histories, CC's elbow was a bit of an unknown, and Hirok's high workload made him a candidate for some age-related bumps and bruises again.  In actuality, it wasn't injuries that befell the rotation.  Hughes, Pettitte, CC, and Kuroda all made at least 29 starts, and Ivan Nova was the low man with 20.  This group made over 88% of the team's starts in 2013, pitched to a 3.88 FIP that was 10th best in MLB, and still weren't able to overcome the offense's ineptitude.  Hirok was money, Andy and Ivan were better than expected, but Hughes was a POS again and the big fella really took a tumble.  In the end, that was the biggest blow.

To a certain degree, CC came into this season with lower expectations.  The revelation of his 2012 elbow problems and offseason surgery set him back in his offseason throwing program, and very early on in camp the talk about diminished velocity started to intensify.  That had been a trend for the past few seasons, but with CC now entering his mid-30s and coming off arm surgery, the concern about the decreased velocity negatively affecting his performance was growing.  Reasonable fans and bloggers alike were resigning themselves to the fact that 2013 CC wasn't going to be as dominant as he had been.  We were cool with it though, because he was still going to be the staff ace.

What We Learned- That Regression Came Much Faster Than Anticipated

Until he wasn't.  CC struggled early in the year as his velocity lingered in the low 90s, then struggled more later in the year when his fastball command betrayed him.  The problems caused by his offseason surgery were greater than anybody thought they'd be and CC was unable to make the adjustments on the fly to correct the problems.  He gave up 224 hits in 211.0 IP, a career-worst 28 of them for home runs, and gave up more solid contact than he ever had in his previous 4 seasons.  There were nights when CC was brutally bad, bad enough to compare to Phil Hughes' worst outings, and the major drop-off in his production was too much for the rest of the rotation to cover.  Anyway you cut it, a 4.78/4.10 ERA/FIP split from your supposed #1 starter is not good.

What We Thought We Knew- The 2014 Rotation Needed Help

As discussed before, the 2013 season was just as much an audition for the 2014 rotation as anything else.  Kuroda and Hughes were pitching for new contract offers in their walk years, Andy could have been pitching to convince the Yanks to offer him a new deal if he wanted to stick around, and if and when injuries struck, the plan was to have David Phelps and hopefully a returning Michael Pineda fill in and give the Yankee decision makers another look at them as candidates for the open 2014 rotation spots.  The Yankees had the bodies to compete in 2013.  They needed to know if they had enough to do it again in 2014.

What We Learned- It Needs Even More Help Than We Thought

They did not.  Hughes did everything in his power to convince Cash to bail on his plan to make him a qualifying offer this offseason, finally being relegated to tandem 5th starter duty with Quad-A castoff David Huff.  Pettitte made up his mind to follow his friend Mo out the door and retire.  We didn't get to see much of Phelps as a starter and what we did wasn't as good as 2012, and we didn't see any of Pineda again after the team decided to hold tight to the rehab reins and bring him back slowly in the Minors.  Factor in CC's major regression and the uncertainty surrounding Kuroda's future plans and the Yankees are in a position where they're looking for improvement from 4 of the 5 spots in next year's rotation.  The only sure thing right now is Nova and he could be anything from a #2 to a #5 based on his history.  Looks like the old "Yankees need more pitching" theme is going to make a comeback.