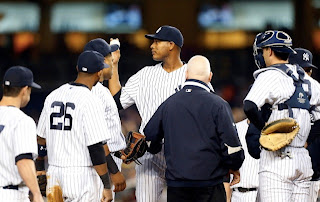 In his place for now will be David Phelps, who pitched the 4 innings of relief after Nova left on Friday night and is as close to being fully stretched out as he can be.  Vidal Nuno, the crafty left-hander, was called up to take Nova's spot on the 25-man roster and will serve as a sort of lefty swingman in the bullpen.  Derek Jeter was moved to the 60-day DL to free up a 40-man spot for Nuno.  Austin Romine has also officially been added to the 25-man in place of the injured Francisco Cervelli, although there's been no word from the team on when they expect him to play in place of Chris Stewart.
Posted by Unknown at 10:58 AM