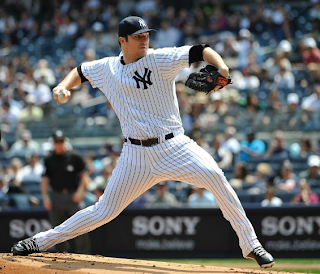 - Overbay: 2-3, 1 HR, 1 R, 2 RBI.  Hasn't been a consistent offensive threat, but it seems like every hit he's gotten so far has been a big one.  His homer in the 7th was no different.  Completely unexpected and easily the best contact anybody made against Dickey all day.

- Hughes: 6 IP, 7 H, 2 ER, 1 BB, 9 K.  More good work from Phil, who turned in his third straight good outing using the same formula that got him through the first two.  He certainly looks like he's making a point to throw his fastball for strikes early, and he's getting more comfortable with his slider and curveball.  Still a few too many 2 and 3-ball strikes sometimes, but he had a rested bullpen behind him today.

The Yanks stay right where they are and welcome the Houston Astros to the Stadium on Monday night for what should be a great opportunity to keep this winning streak going.  Andy Pettitte takes the ball for New York, opposed by Lucas Harrell.
Posted by Unknown at 3:50 PM