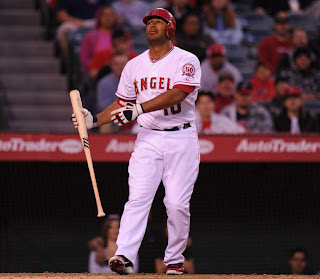 Regardless of performance, the Yankees are now on the hook for $13 million owed to Wells over the next two seasons.  In case you'd forgotten, that's the exact same contract the Yanks signed Ichiro Suzuki to after letting Nick Swisher walk.  The talk last night centered around the Yankees planning to pay the bulk of that Wells money this year to avoid adding to the 2014 payroll, but I've yet to see anything concrete saying they can or will actually do that.  No matter what they end up doing to cover this added cost, the money the Yankees are going to pay Ichiro and Wells this season is going to exceed what Nick Swisher is getting paid.  They willingly let Swish walk as a way to help cut costs for 2014, then added two older, lower-quality players who both have some kind of guaranteed money attached to them in 2014.  Does. Not. Compute.

(** UPDATE 3:50 PM- Apparently I missed this post from Mark Feinsand earlier in the day explaining how the distribution of Wells's remaining salary could work in the Yankees' favor.  So at least there's that.)

And to top it all off, Wells becomes another roadblock in front of the crop of young, fringe MiL outfielders who have gotten a long look this spring.  Guys like Melky Mesa, Ronnier Mustelier, and Thomas Neal all project to be similar to Wells in terms of offensive production, but they all also come with added benefits of speed, defensive flexibility, and the higher ceiling for production based on their age.  The odds of Wells rediscovering his bat speed or power stroke in his mid-30s are slim to none.  The odds of a Mesa or Neal getting more comfortable with the Major League game and improving their production with more reps are better.  And what kind of message does it send to these guys when the Yankees continue to scour the bottom of the barrel for "proven" Major League players to plug in ahead of them on the depth chart?  If they aren't good enough for roster spot consideration, then what the hell are they still doing in Major League camp?

The overall sense that I and some of my fellow IIATMS/TYA writers have on this move is that it's one that screams desperation and panic from the Yankee front office's standpoint, and that's not good.  What's even worse in a desperation/panic situation is making a move that doesn't actually help and that's the only logical conclusion to come to when you add up all the factors of this trade.  Wells doesn't hit for average or power, doesn't have strong platoon splits against LHP like the Yankees need him to, is going to count against this year and next year's payroll totals in some form, and may not even be a better player at this stage in his career than the younger internal guys the Yankees already have.

The Yankee scouts and decision makers who made the call to pull the trigger on this trade get paid for what they do, so we have to assume they saw something they liked in Wells this spring to go through with a move like this.  If it ends up working, I'll be the first to sit down and eat a heaping helping of humble pie.  Looking at the trade from all the angles listed above doesn't make that outcome seem very likely, though, and that's my issue with it.
Posted by Unknown at 3:35 PM