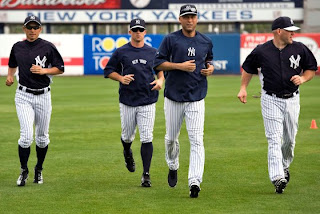 
The top of the order is where a lot of this proposed small ball transition will be taking place.  Derek Jeter will still fit into the top of the order in some way when he's healthy, with Brett Gardner and possibly Ichiro Suzuki now being looked to as the primary table setters thanks to their speed and Gardner's strong BB rate.  Because of that walk rate, Gardner would be the preferred person to hit leadoff over Ichiro, but we could see Ichiro there as well if he's hot and Gardner is slumping.  The big question will be who takes over for Jeter in the 2-spot when he's on the DL, like he will be to start the season, or getting a day of rest.  Don't be surprised to see both Gardner and Ichiro hitting 1-2 in some capacity in those games if the Yankees are facing a righty pitcher.

Moving down to the heart of the order, this is where the Yankees will struggle the most early on because of their injury problems.  Alex Rodriguez, Mark Teixeira, and Curtis Granderson are all out with injuries for varying periods of time, and they'll all come back with the possibility of their injuries lingering and negatively affecting their production.  When they are healthy, this group is still one of the most well-respected and dangerous middle orders in baseball.  How healthy they'll be and how long they'll be able to stay healthy is a big unknown, as is the amount of power they'll be able to re-inject into the lineup.  Granderson is a fair bet to maintain his slugging ways, but A-Rod and Teix's continuing injury issues make them less of a certainty.

It's not a total wasteland in the middle of the lineup, with one familiar face and one new guy there to act as the heart of the order until the injured guys come back.  Robinson Cano will be a fixture in the number 3 spot in the batting order this season, and more than ever before things are shaping up to have this season be the one where the spotlight is fixed on him.  He'll be a leading MVP candidate all year because of the continued injuries to core lineup members and he's in a contract year, which will make his hot streaks and slumps even more newsworthy.  Kevin Youkilis is the fresh face added to the mix, by necessity more than desire.  He'll start the season as A-Rod's third base replacement and then should have a steady diet of DH at-bats coming his way.  If his spring power surge is any indication, there's still life left in Youkilis' bat.

The bottom of the order is the area where the Yankees' cheap offseason plans really get brought to the forefront.  Gone are the days of plugging guys like Matsui, Posada, Russell Martin, and Raul Ibanez into the 7th or 8th spots of the lineup and being happy with the power production and present are the days of just hoping for something from the players listed on the 7-9 spots of the lineup card.  The 7-hole should be a rotating spot for Travis Hafner or whoever is hitting as the right-handed DH or outfielder that day, and 8 will be taken mostly by the light-hitting duo of Francisco Cervelli and Chris Stewart.  Joe can get creative with the 9-spot as well, using it for Ichiro or Gardner to create his favorite "two leadoff hitters" approach, or for someone like Eduardo Nunez when he's playing for Jeter.

As it's been for the past two years, the Yankee lineup will be one that's heavy on platoon bats.  The lineup juggling that Joe will have to do early because of injuries won't be slowing down too much when everybody is healthy because guys like A-Rod, Youkilis, and Hafner are becoming increasingly less effective against same-handed pitchers.  Teix is the lone switch hitter left in this lineup, and the Bombers will have to count on everyday guys like Cano, Granderson, and to a certain degree Gardner to provide consistent everyday production regardless of who's pitching.

The Opening Day lineup looks pretty depressing right now.  That only means there's nowhere to go but up, and when the walking wounded start coming off the DL and back onto the lineup card I expect the runs per game average to do exactly that.  This year's lineup doesn't look as deep as last year's on paper, but there are still a lot of elite-level skills intact.  Gardner has elite speed; he and Youkilis have elite count-working/pitch recognition skills; Granderson has elite power, as does Hafner; and Cano is still one of the elite all-around hitters in baseball.  While this crew may not score as many runs as we've become accustomed to Yankee teams scoring, they should still score more than enough to win games.