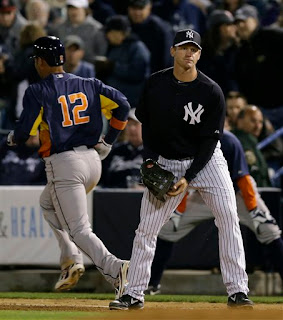 - Francisco: 2-4, 1 HR, 1 R, 1 RBI, 3 LOB.  I didn't expect much from him when he was signed.  Now I'm almost bummed that he'll be gone once roster decisions are made.  What does that say about the state of the Yankees right now?

Hiroki Kuroda is the next in line to make his final spring appearance this afternoon when the Yanks take on the Pirates.  Robinson Cano should be back in the lineup after missing last night's game with a stomach ailment.  No word on Ronnier Mustelier's status.
Posted by Unknown at 7:50 AM