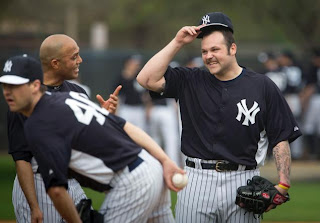 
The lower-leverage middle relief corps is capable if not slightly questionable.  David Phelps will most likely open the season as the long reliever/swingman and he proved he was up to the task last year in his rookie campaign.  With a year's worth of at-bats to study, however, the rest of the league now has a book on Phelps and it will be on him to adjust his game as needed and show that he wasn't just a one-hit wonder.  David Aardsma and Clay Rapada will combine to be the low leverage righty/lefty duo and both come with a level of uncertainty tied to their projected performance.  Aardsma has spent almost two full seasons on the shelf with injuries and Rapada is already dealing with his own shoulder problems.  They can both be effective when used in the right situations, and it will be on Joe to make sure he puts them in those right situations.

Moving up to the higher-leverage group, we find the usual suspects.  Boone Logan is still firmly entrenched as the team's leading LOOGY and after some early spring elbow scares he appears to be healthy.  He's looked good in his ST appearances and neither the health concerns nor the delayed start to his camp appear to have negatively affected his fastball velocity or slider command.  Logan's workload was heavy last year, borderline excessively so, and personally I think there's a direct connection between that and his elbow problems.  It will be imperative for Joe to be mindful of that and not always get Logan up in the 'pen in situations where he's not definitely coming in.

Switching hands from left to right, we move into setup role territory and a new opening for the part of "7th Inning Guy."  The leading candidate for that role is Joba Chamberlain, who is finally back to full health and back on track to returning to the once dominant form he had years ago.  While it's unlikely that we'll ever see that kind of Joba ever again, he is still on the right side of 30 and still an above-average relief pitcher when he's healthy.  If he does lock down the 7th inning role he'll be passing the ball to David Robertson, who re-assumes full-time setup duty now that Rafael Soriano has moved on.  Robertson is still one of the best relief pitchers in the business, and while it might be a stretch to say he's been groomed to be the next closer, he certainly hasn't wasted the opportunity to learn from the School of Mo.  He's added a cutter to his pitch mix and established much better command of his fastball and curveball.

Which brings us to the closer.  The man, the myth, the legend.  Mariano Rivera will make his final tour as the Yankee closer this season, and he added the new wrinkle of doing it coming off his first major injury of his career.  Mo has been as big a part of the last generation of Yankee teams as Derek Jeter has, and it's almost strange to think that he won't be back after this season.  Normally a professional athlete his age coming off ACL surgery would be a huge red flag, but Mo's rehab and spring ramp up has been smooth sailing and his results on the mound (6 IP, 3 H, 1 BB, 0 R, 8 K in 6 games) suggest he hasn't missed a beat.  It's only fitting that a pitcher of Mo's caliber go out on top and he looks primed to do just that.

As usual, there's no shortage of viable depth behind these first seven, depth that will be called on right from the get go this season.  With Rapada likely to start the season on the DL, at least one spot will be open and that could turn into two if Phelps needs to make a spot start for Phil Hughes.  2012 returnee Cody Eppley and newcomer Shawn Kelley are the leading right handers available and there's a small army of lefty options to choose from.  Later in the year, we could see some of the top relief prospects (Montgomery, Whitley, Pinder) make their MLB debuts as well.

Pitching is the strength of the 2013 New York Yankees, especially to start the season.  Like the rotation, the bullpen is made up mostly of returning players whose skill sets and projected performance are pretty easy to gauge.  We'll have to wait and see how many of them return after this season, and who gets the torch passed to them from Mo, but for now let's just kick back and enjoy the time we have left with the G.O.A.T.