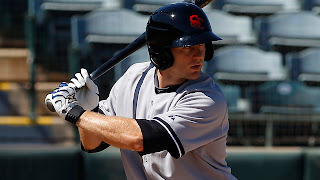 
"Adams could have developed into a nice bench player for the Yankees within the next year, but realistically what did they give up by losing him?  He turns 26 in less than two months, so he's already old for a prospect, he's never had a single at-bat above Double-A, and that career best year he put up in 2012 was in his second trip back to Double-A.  Yeah he can play two infield positions, but I've never read any scouting reports that say he can play either of them that well and I really don't think the Yankees are going to let Cano walk and hand the position over to a still somewhat unproven guy like Adams and a limited ceiling guy like CoJo.

Not to mention the fact that Adams has had some serious injury problems in his career.  That ankle injury from a few years ago really hurt his development and probably sapped some of his physical skills, and he's been battling a back injury all spring.  We don't even know how he's going to hold up physically over a full 162-game season.  Plus, I read some tweets from Josh Norris that made it sound like this was the right move for the Yankees to make if they wanted to keep Adams.  They're not the type to just dump productive young players like that.  They felt they had to address a need now, a need that Adams couldn't fulfill, and their 40-man roster situation put them in a tight spot.  We may not like the move to add Wells, but we've got to give Cash the benefit of the doubt when it comes to managing the roster and see what happens in the next day or so."

I'll give you two guesses on which take was mine when I first heard the news and which one was mine after I read the Norris updates.

P.S.- I wasn't implying that my prospect rankings were irrational.  Personally I think they're pretty damn good.  Tamar's are probably still better, though.
Posted by Unknown at 11:00 AM

that they didn't put him on waivers suggests that they could have very well worked out a deal, or have the intent of pursuit of one. His agent stating that it was the best way for them to retain him suggests a good possibility of that, unless of course another team swoops in with a major league offer. With Alex's injury and the impending budget, Adams should see a light at the end of the Bronx tunnel.