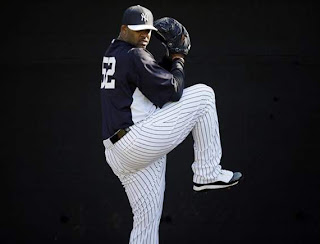 (The Air Jordan cleats are never not badass.  Courtesy of The Daily News)

Continuing the trend that's become commonplace in the last few years, the Yankees enter the 2013 season with their starting rotation as their greatest strength.  Discontinuing what has also been a yearly trend, they won't enter 2013 with a lot of questions about new members or expected performance of returning members.  The five guys who will make up the starting rotation are all known commodities at this point in their careers, with the natural amount of wiggle room for production improvement or regression that comes with every new season applicable to each.  The biggest question that most of them will face this season will be health-related, and it's how each pitcher answers that question that will ultimately determine just how good this group will be this season.


For the fifth straight year, CC Sabathia anchors the rotation as the unquestioned ace and still one of the top 10 starting pitchers in baseball on his worst day.  As any version of statistical measurement will show, CC is still on top of his game as far as production is concerned and his Yankee career-best K and BB rates last year speak to that.  What can't be measured is how much of an effect his heavy career workload has had on his body and how his offseason surgery to remove bone spurs from his pitching elbow will impact his performance this year.  The Yankees are taking care of CC this spring by limiting his ST workload in hopes of saving innings for later in the year, and CC has done his part to stave off health-related regression by dropping some offseason weight again.  There might be a few rough outings early in April as he rounds into form, but once the weather starts heating up the big fella should do the same.

Behind Sabathia are a pair of veterans as reliable as any in the game in Hiroki Kuroda and Andy Pettitte.  Kuroda was quick to silence the critics with his performance last season, assuming the role of unofficial team ace during CC's DL stints, and was the best pitcher on the staff for stretches.  His ability to throw strikes consistently and his pinpoint offspeed command carried him to one of the best years of his career and earned him a raise on his new 1-year deal.  Pettitte also surprised the critics last year (myself included) when he elected to come out of retirement and fill the much-needed void in the middle of the rotation.  Both Pettitte and Kuroda have been working at their own paces this spring and both seem to be right on track to pick up where they left off last year.  Their final numbers may not look as great as the numbers from 2012, but the production should be of similar above-average caliber.

At the bottom of the rotation come the two young guys whose production will determine how far this year's rotation climbs up the "best in baseball" ladder.  While we can reasonably estimate what to expect from Sabathia, Kuroda, and Pettitte, Phil Hughes and Ivan Nova come into 2013 as the wild cards.  Hughes battled control problems, offspeed effectiveness problems, and health problems last year, and Nova got punished on every mistake he made on his way to one of the worst pitching seasons in the AL.  Nova has looked much better this spring than last, which could be a good omen that his worst days of 2012 are behind him.  Hughes' back is acting up again and could cause him to start on the DL.  As mid-20s pitchers entering their primes, the Yankees are hoping both Hughes and Nova improve upon their 2012 performances and I'm on the record as saying I think they will.

Now back to those health-related questions.  Between CC's elbow, Hughes' back, Kuroda's 2012 workload, and Andy's entire old man body, there's no shortage on areas of concern with this group.  Hell, even Nova has been known to strain or sprain something every now and then.  To maximize this group's effectiveness and to overcome the incredible toll that injuries are taking on the offense, it's absolutely critical that this rotation stay intact and make as many starts as possible.  The Yankees are a little thin behind this fivesome, and dipping into the Triple-A well too many times could be enough to cost them a playoff spot in what will be a tight division and Wild Card race.  Being optimistic, I'd like to set the bar at 140 combined starts and leave some wiggle room for a 15-day DL trip here and there.  Being realistic, I think I'd take 125-130.

We know what this group is capable of when they're all healthy and pitching well.  We saw it last June and so did the rest of the AL East.  There's plenty of talent and experience in this rotation and when everything is clicking they're right on par with Tampa Bay for the best top-to-bottom rotation in the division.  If they can stay healthy and put in somewhere around that 130-140 start mark this season, they could be the reason an undermanned offensive Yankee team makes it back to the playoffs.  If the injury bug continues to bite, that could be enough to have the Yankees sitting at home in October.