Handicapping The Final Days Of The Outfield Roster Competition 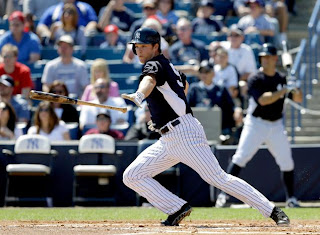 (Boesch is probably in.  Who's joining him?  Courtesy of Kathy Willens/Daily News)

Spring Training is hitting its home stretch this week in the final handful of days before camp closes and the 25-man roster gets set.  While other roster competitions are either over or have been rendered moot by injuries, the battle for the final outfield spots is coming down to the wire.  The injuries to C-Grand and Teix have left not one, but two spots up for grabs, and the Yankees certainly haven't been shy about adding bodies to the competition.  With just a few more games to go and some guys' positions looking stronger than others, here's the standings as I see them and the odds that each contender sees his name picked for the Opening Day 25-man.

Trade still isn't finalized, dude still isn't in camp, hasn't even take one swing of the bat in a Yankee uniform, and he's the odds-on favorite to be the Opening Day righty bench outfielder.  AND he's still getting paid $21 million this year.  How's that for a sweet deal?

He's been out for a few days with a rib cage strain, but it's not expected to be serious and I'm sure he'll be in the lineup today.  His left-handed power swing and youth gives him a leg up on everybody else when it comes to being the other half of the corner OF platoon.  Another injury setback could put his spot in jeopardy, but for now he's in.

He's swung a decent bat since being signed (6-23 in 8 games with 2 HR) and was the likely candidate to take that 4th spot before the Wells deal.  Now he's looking like the odd man out unless Wells or Boesch gets hurt.

His speed and power have been as advertised, with Mesa hitting 3 homers, stealing 3 bases, and playing very good outfield defense in camp.  Unfortunately so has his hacker's mentality at the plate (15 strikeouts in 53 ABs) and that, plus the influx of veterans, has worked against him.  He's looking like a good bet to be the Opening Day CF in Triple-A.

Neal has displayed a solid all-around game this spring.  He's got a .766 OPS in 40 ST at-bats, is 3-3 in SB attempts, and has shown his flexibility in playing multiple outfield positions.  He was also hurt by the additions of Francisco and Wells and it would take an incredible series of events to have him leapfrog over everybody else in these last six days.  I've got him penciled in next to Mesa and Zoilo in the Triple-A outfield.
Posted by Unknown at 10:30 AM