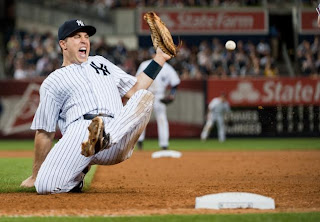 The big elephant in the room for the Yankee lineup this season is and was always going to be health and durability.  Szymborski comes right out and addresses that elephant by pointing out that ZiPS doesn't expect Alex Rodriguez, Kevin Youkilis, Travis Hafner, or Brett Gardner to make 500 plate appearances in 2013.  Those first 3 don't come as a huge surprise, in fact A-Rod and Hafner not reaching that plateau is all but a foregone conclusion.  But I think the Yankees would like to get 500 PA from Youkilis this season, and I think they'd be incredibly disappointed to not get 500 from Gardner given the level of talent backing him up.  The Yanks were going to have to pick up some production here and there from their bench this season, but the more they're relying on those guys instead of their everyday players, the worse shape they're probably going to be in.

As for specifics, ZiPS sees Robinson Cano as the clear cut best player in the lineup this year, and there's absolutely no reason to disagree with that.  ZiPS projects a .301/.359/.522 line for Cano (.368 wOBA), with 42 doubles, 29 HR, and 100 RBI even.  It's a pretty modest projection for Cano given his last few seasons, and I'm sure the Yankees are hoping for production that exceeds those numbers, but at 6.0 projected WAR, ZiPs sees Cano as head and shoulders above his teammates in terms of value.

On the mound, ZiPS projects a good but not great performance from the rotation.  Only CC Sabathia is projected to pitch over 200 innings, 202.1 in fact, and he isn't projected to make a full season's worth of starts.  Hiroki Kuroda is projected to take a step back in 2013, with just 186.0 IP and an ERA/FIP split in the low 4.00s, and Pettitte is only projected to make 16 starts.  This would put added pressure on Phil Hughes and Ivan Nova to step up, but ZiPS doesn't see them being any better than they were in 2012.  There are positive forecasts for the main bullpen crew, and Cody Eppley gets some unexpected love, but to contend for the division title the Yankees would need their rotation to beat these projections.

It's important to remember that projections are exactly that, and they aren't written in blood or chiseled in stone as the actual numbers that each player WILL put up.  But the more advanced projection systems, like ZiPS, tend to be pretty accurate and a good baseline for what to expect from players and teams.  Last year, ZiPS projected the Yankees to win 95 games based on their collective player projections and that's exactly how many games they won, so it's not like Szymborski is shooting in the dark here.  A quick sum of the projected WAR numbers for this year's core Yankees puts them at about 40, which would be good for 87-90 wins and a spot on the threshold of the postseason.  That seems fair based on the makeup of this year's team and everything else that's happened in the AL East around them.
Posted by Unknown at 10:25 AM