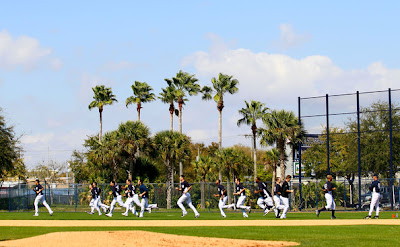 I don't know about all of you (although I think I have a pretty good idea from reading the comments sections of most blogs), but I am beyond ready for this season to start.  I don't know if it was the relative inactivity by the Yankees during hot stove season, the constant talk about the 2014 payroll plans, the never-ending saga surrounding Alex Rodriguez, or an amalgamation of all of those things, but this offseason has felt like the longest once since I started AB4AR back in mid-2009.  Just a dragging, slow, tired snoozefest of an offseason, and quite frankly, I'm running out of things to say about it.  But in seven days I won't have to worry about that anymore.

The end of the Super Bowl on Sunday night not only signified the end of football season.  It also unofficially signaled the start of baseball season.  Sure there's still a long way to go in the NBA and NHL seasons, and they'll have their time to shine when their postseasons come around, and March Madness is always exciting.  But baseball isn't called the national pastime for nothing.  It's the only major sport out there whose preseason actually means something, and that says something about not just the players and coaches involved, but the fans as well.  Baseball is a year-round sport, being a Yankee fan and blogger is a year-round activity, and in seven days we all get back to the best part of that year-round cycle.

This offseason was certainly not short on talking points, and I don't expect that well to dry up once Spring Training starts.  But in seven days, at least those talking points will change over to what's happening on the field.  It's going to be a very welcome change in my world, as I expect it will be in every other Yankee fan's world.  In seven days, baseball is back.

P.S.- That was as close as I'm getting to a countdown post.  If you want to check out a real countdown series, you should be following what Stacey, Matt, and the rest of my compadres over at TYA have been doing for the last few weeks.
Posted by Unknown at 7:08 AM