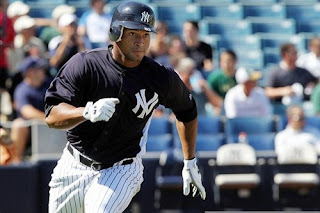 
In a perfect world, the Yankees would open the 2013 season with the following starting outfields at their top 3 levels:

Actually, in a perfect world Ichiro would not be anywhere near the starting outfield this season, so I'll revise that statement to say, "in a perfect version of the currently imperfect world in which the Yankees have attempted to construct this season's roster."  There, that's better.  The problem with any perfect version of any perfect world, however, is that it doesn't exist, and the Yankees' current outfield situation is no exception.  Not included and as such not accounted for in that hypothetical outfield breakdown are the gaggle of cheap free agent signings (Matt Diaz, Thomas Neal, Juan Rivera), quasi-prospects Abraham Almonte, Rob Segedin, and Adonis Garcia, and possibly Russ Canzler if he clears waivers.  That's a lot of bodies and a lot of potential ABs, and they've got to go somewhere.

Realistically, the Yankees will carry at least one of that FA group on their Opening Day bench, possibly 2 if Canzler sticks because of his ability to play first base.  There is also the possibility of someone like Mesa or Mustelier wowing in ST and earning a spot on the bench as well, but either scenario would open up some room.  Whoever doesn't win roster roulette in camp could and more than likely would serve as the designated OF depth in Triple-A to cover for injuries at either of the top, but that still leaves that group of MiL guys unaccounted for.

This is where it starts to get tricky, as a case can be made for each of these players being worthy of getting regular ABs.  Almonte is trying to prove he's more than just a collection of tools, and the Yankees aren't going to want to let him sit and rot because of those tools.  Segedin is trying to resurrect his prospect status and not get labeled as "organizational filler" after just a few seasons in the Minors.  And Garcia, as an older FA from Cuba, is trying to strike while the iron is hot and prove he has value as a potential prospect.

But none of those 3 players has the upside of Flores, Austin, or Heathcott, and should certainly not be getting in the way of those 3 getting regular playing time either.  This shinier trio proved there's not much left for them to learn at High-A, and to send any of them down there would be a waste of time.  But to make room for the second-tier OFers and anybody who might get bumped down from Triple-A, someone might have to be sacrificed and sent back to Tampa to start the year.  Josh Norris discussed this possibility a little over a week ago, identifying Austin and Zoilo as the 2 most likely candidates to repeat levels.

With a group of players this large, it's to all of their benefit to get as much playing time as possible, even if it means playing a level below where they rightfully should be.  But it's also important for guys like Austin, Flores, Heathcott, Zoilo, and Mesa to get at-bats against the best possible level of competition to continue to improve their skills and prospect stock as future contributors at the Major League levels, and the Yankees could have a problem making that happen as they're presently constructed.  Again, it's not the worst problem in the world to have, and one that can be easily fixed by making a small trade here or a few roster cuts there, but it's something the Yankees should work to figure out early in the season so there's not a roadblock in place when someone like Mason Williams is ready to move up.
Posted by Unknown at 3:00 PM