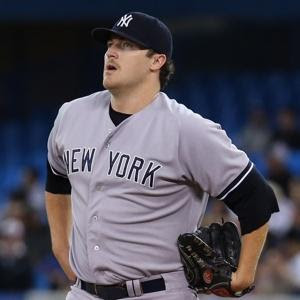 
Phil gave up 35 HR last season, tied for 2nd most in MLB with the immortal Jason Vargas, and not many of them were gimmes.  Coming into 2012 Hughes had given up 53 total HR in his career, so coming closer than anybody would want him to come to doubling his career HR allowed total is obviously a step in the wrong direction.  Of Phil's 35 homers allowed, 22 of them came at home compared to 13 on the road, a sign that pitching in Yankee Stadium isn't doing him any favors.  24 of the 35 were hit by right-handed batters, something that doesn't exactly jibe with being a flyball pitcher in YS3, and despite Phil improving his overall performance after a poor start to the season, his 1st half/2nd half homer splits were pretty even at 19 and 16.  The only thing that really saved Phil's numbers from looking even worse was 23 of the 35 being solo shots.

Breaking the 35 homers down by pitch type according to FanGraphs' PITCHf/x tool, we get a distribution of 24 off the fastball, 5 off the curveball, 3 off the cutter, 2 off the changeup, and 1 off the slider, the pitch that Phil started to work into his repertoire with success late in the season in place of the cutter.  Phil's distribution of his previous 53 homers allowed included 27 off his fastball, 14 off the cutter, 8 off the curve, 1 off a 2-seamer, and 3 off pitches that were uncategorized by FanGraphs.  While those 2 breakdowns show that Phil giving up on the cutter in favor of more offspeed stuff was a smart move, they also lend some support to the argument that Phil was too predictable with his pitch sequencing and too reliant on his fastball in 2012.  That argument is supported by a 65.6% fastball usage rate in 2012, Phil's highest since his rookie year.

Another sub-stat of the 35 homers that stood out to me was the high percentage of them that were given up in pitcher's counts.  Phil didn't get into a lot of 2-0 and 3-0 counts in 2012, but when he did he only gave up 5 total homers.  He gave up more than that in 0-2 and 1-2 counts, just as many in 2-2 counts, and an astonishing 16 HR in either 0-0 or 0-1 counts.  0-1 is a great count to have as a pitcher, as you can pretty much throw whatever you want and can attack corners of the strike zone to try to get the batter to extend or the ump to give a generous call.  0-1 is not a count in which a pitcher should be giving up that many gopher balls, and again it speaks to Phil's over-reliance on the fastball.

According to Texas Leaguers, Phil threw 336 fastballs in 0-1 counts last season, almost 74% of his total pitches thrown in that count.  He threw his fastball 68.3% of the time in 0-0 counts, so it certainly appears as though Hughes was too fastball heavy early in the count and hitters started to pick up on it.  And when you add in the pitch location plot for 0-1:

... it becomes pretty obvious why Hughes was giving up so many homers.  Not only was he throwing a lot of fastballs, he wasn't throwing very many good ones.  The overwhelming majority of the red fastball dots are either way outside the strike zone or in the upper middle part of the strike zone, in areas that allow hitters to extend their arms and make solid contact.  0-1 is not an obvious fastball count by any stretch of the imagination, but Phil made it one too many times and then compounded that by throwing too many hittable fastballs.  You can get away with that stuff in Double or Triple-A, but Major League hitters are going to pick up on a trend like that and they're going to expose it.

Despite all of this, there is reason to be optimistic about Hughes turning things around this season.  He was much more effective once he started to incorporate The Slutter into his pitch mix and once he started to use his changeup more.  He should be even more comfortable with those pitches this season, and that should result in him going to those pitches more early in counts and mixing up his offerings so batters can't zero in on his fastball.  If Hughes can cut down on his fastball usage in 2013, and not be afraid to throw his offspeed stuff early in the count or when he's ahead in the count, he can really cut down on his homers and possibly take a step towards being the pitcher we all hoped he'd be.
Posted by Unknown at 12:51 PM